I went hiking with David Scott in the Table Mountain of Manokwari on 30 March 2010. We started walking in the morning at around 8.50 a.m. Mr. Scott was a tourist from London who came to Manokwari city - the capital of Papua Barat province of the Republic of Indonesia on a tour to see the flora and fauna of West Papua. It was drizzling at that time but we decided to keep on hiking in the tropical rainforest. I, as a tourist guide, usually go hiking in the Table Mountain with my friend, Paul. We accompanied David Scott to watch bird and did some explorations in natural caves. 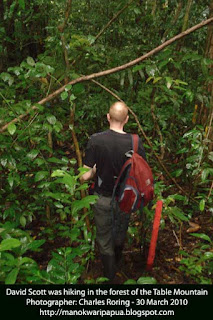 After walking for around five minutes in the forest, David Scott spotted two hornbills  at a tall tree. He used his binoculars to magnify the look of the birds. Unfortunately, my digital camera was only a Sony DSC W30 that was not equipped with long lenses. I could shoot the picture of the birds but it was not clear enough.
Then we continued walking for several hours inside the tropical rainforest which as the trekking path of Alfred Russel Wallace in 1858 during his expedition of the Netherlands New Guinea in search for birds of paradise.
David Scott said that he brought Wallace's book, "The Malay Archipelago" and was reading it. I said that I read the book and had translated some pages on the New Guinea particularly on Wallace's expedition in Dorey bay of Manokwari into Indonesian language. Wallace did not mention Manokwari city in his book because at that time, Manokwari city did not exist. Dorey bay was still an undeveloped area with some small villages along the coastal area. Wallace met German evangelists, Otto (and his wife) and Geisler when he and his staff landed on Mansinam island.
David Scott and I and Paul visited two caves in the Table Mountain. Alfred Russel Wallace did not mention these caves in his book, The Malay Archipelago. We were able to see bats there. Every tourist enjoys bat watching with me and Paul whenever he or she is in Manokwari.
In the afternoon, we took a break and had lunch at Japanese War Monument. While Mr. David Scott was sitting and admiring the beauty of the tropical rainforest, I and Paul cleaned the surrounding area of the monument. We picked up plastic bottles and tote bags and gathered them in one place.
Several minutes later we continued walking out of the Table Mountain to Pasir Putih Beach. I had to say that I was very tired. We arrived at the beach across from Gereja Immanuel at 4.00 p.m.
The next day (31 March 2010), I, Paul and David Scott visited some islands in the Dorey bay of Manokwari where we snorkeled and talked with villagers in Mansinam island. He said that he enjoyed the trip in Manokwari very much.
As a tourist guide, I provide a three-day tour package around Manokwari to tourists who want to see and experience the natural beauty of the forests, and corals in the Dorey bay.
Day 1. Hiking, bird watching, caving and bat watching in the Table Mountain
Day 2. Visiting the islands in the Dorey bay where tourists can enjoy hiking, bird watching, swimming and snorkeling
Day 3. Traveling to the Northern Coast (Pantura) of Manokwari and canoeing to Kaki islands.
For rates and more information about this three-day package tour and other tour packages into the interior of Papua island, please do not hasitate to contact me - Charles Roring by e-mail to: peace4wp@gmail.com
Also read:
David Scott went snorkeling in Dorey bay of Manokwari
at April 10, 2010