Dorey bay is the name which Alfred Russel Wallace, a British naturalist, mentioned in his book "The Malay Archipelago". He came to the bay in 1858 to conduct research on birds of paradise and anything that was related to natural history of New Guinea island. Since then people who read his book have come from all over the world to Manokwari to see with their own eyes this beautiful Dorey bay.
Well, in general it is similar to other bays in the world. But every bay has its own history and uniqueness. Here in Dorey bay, tourists can travel around some small islands. The most famous one is Mansinam. It is a small island that is located at the outer most part of the bay. Mansinam became the first to receive German missionaries who went to this Netherlands New Guinea to preach Christianity. Mansinam is considered by the indigenous Papuan people as the island of civilization.
The photographs that I show below is about children in Mansinam island who were fishing at the harbor. They have been resized, and optimized in Adobe Photoshop CS3 before being uploaded into this blog.

During World War II era, Japanese forces constructed a lot of bomb shelters to defend Manokwari against their enemies, the Allied forces. The Imperial Japanese Army deployed 50,000 soldiers to Western New Guinea to reinforce their defense line in the Pacific. Lieutenant General Fusataro Teshima from 2nd Army led the troops and chose Manokwari as their headquarters.
Activities that can be done around the small islands of Dorey bay are swimming, snorkeling, scuba diving, hiking and bird watching. Tourists can also meet the villagers who live in Mansinam and Lemon islands and have friendly conversation with them about interesting topics. For shipwrecks sites, Dorey bay is the best in Indonesia. 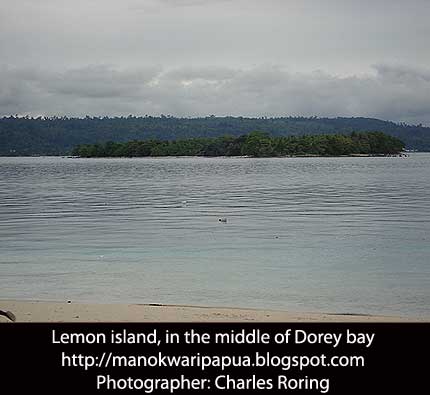 If you want to snorkel or scuba dive in Dorey bay, don't forget to bring your own gear. Although these Mansinam and Lemon islands are located close enough to Manokwari city, they are very calm. The pace of living looks slow. 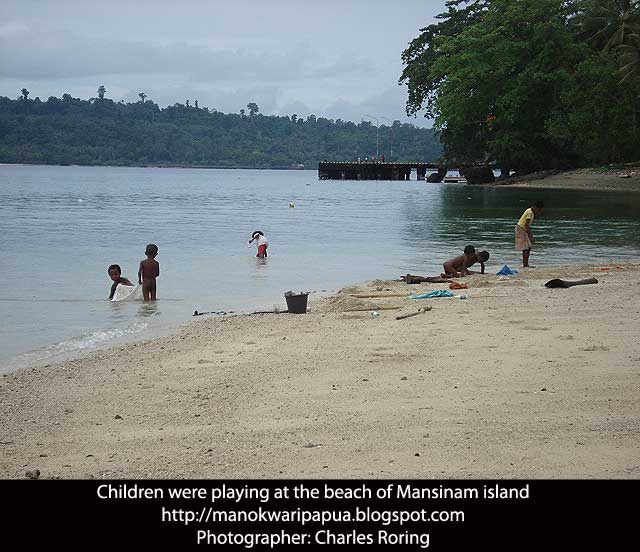 As a tourist guide, I provide a tour package for tourists who want to travel around the islands in Dorey and see the beauty of their coral reef.
Don't forget to contact me via email: peace4wp@gmail.com when you have arrived in Manokwari city, I will be happy to be your tourist guide and arrange your tour around the city or even deeper into the interior region of Papua that is suitable to your needs and physical condition. by Charles Roring
Also read:
Hiking, Snorkeling, and Freediving in Manokwari
at April 12, 2010