David Scott Enjoyed Snorkeling in the Dorey bay of Manokwari

As a nature lover, I like traveling around hiking in the tropical rainforest of Papua or just swimming and snorkeling at the beach of Mansinam or Lemon islands. Snorkeling is a fun activity is you want to enjoy the beauty of Papua's nature particularly its coral reef and colorful ornamental fish.
Last Wednesday 31 March 2010, I accompanied Mr. David Scott to Mansinam islands in the Dorey bay of Manokwari Papua. Manokwari is the capital town of Papua Barat Province in the Republic of Indonesia. It stretches along the Dorey bay where two or three islands protect the city from big waves that flow from the Geelvink bay (now also known as Cendrawasih bay).
Besides snorkeling, we also visited the old church and a well made by Dutch missionaries who worked in Mansinam island after German evangelists Otto (and his wife) and Geisler began spreading Christianity in 1855. At around 12.30 p.m. I, Paul and David Scott took a brake at a wooden stage across the Lahai Roi church. During the lunch brake, I and Mr. Scott were discussing Wallace expedition in the Dorey bay. From his book, the Malay Archipelago, Alfred Russel Wallace said that his boat landed on Mansinam island and Otto went to meet him. I know Wallace expedition in Dorey bay, that's way I could discuss the content of the book with him. David Scott said last night he read the pages of the book where when Wallace was going into the forest, Papuan children were shouting "Arfaki, Arfaki" at him trying to warn him not to go into the forest because the people from the Arfak tribe could kill him. Wallace ignored their warnings and continued to go up to the mountain, which in our opinion is what we now call the Table Mountain. 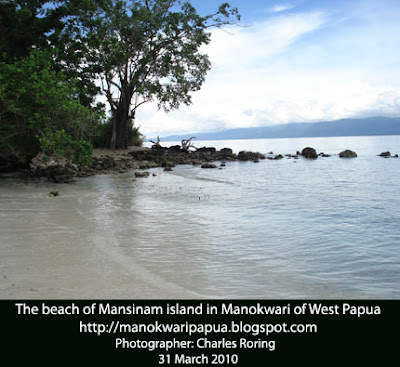 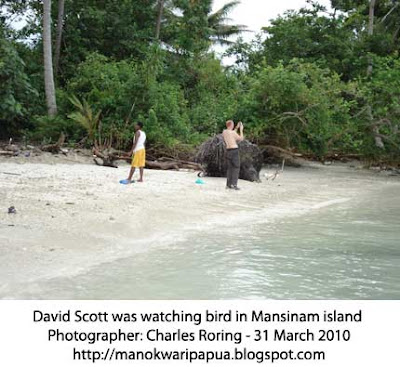 Bird watching and snorkeling in the Dorey bay around Mansinam island can be done especially in the morning when the weather is bright and the sea is calm. We swam around along the southern beach of the Mansinam island. Mr. David Scott brought his own snorkeling gear which was good for observing beautiful corals and the fish. 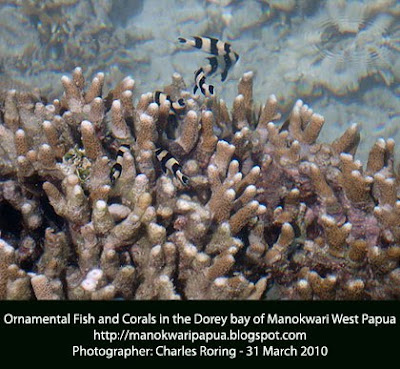 The islands in the Dorey bay of Manokwari are also good for scuba diving. There are shipwrecks around that can be dived on. When I, Paul and Mr. David Scott visited these islands, we did not bring any diving gear. I am not a PADI certified diver either, so I could not guide tourists underwater. Well, I think in the future, I will get my diving certification. Mr. David Scott commented that the two days tour around forest and the islands in the Dorey bay were fun. He thanked us and left for his hotel when the sun nearly set in the West.
If you are interested in traveling around Manokwari, I can help you by arranging some guided tours that are suitable to your needs and physical condition, just contact me via email: peace4wp@gmail.com or cell phone: +62181332245180  by Charles Roring 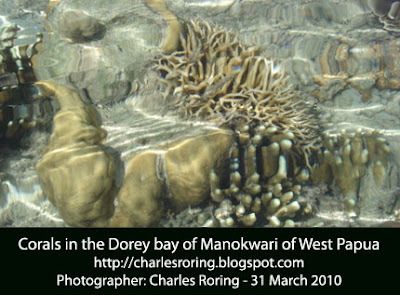