In my spare time I sometimes make drawings of birds that I saw in the forest while I was guiding tourists. Usually, I make sketches of birds using pencil on paper.
After that, I add some colours using Derwent Watercolour pencils. When they are finished, I still redraw the artwork digitally using Autodesk Sketchbook. My device is Samsung Galaxy Tab A with S-pen. Some of the birds that I draw can be seen in the following collage picture.
There are Northern Cassowary, Black-capped Lory, Sulphur-crested Cockatoo, Pale Blue Monarch, Lesser Frigate Birds, Red Bird of Paradise.
The artworks that look good are then uploaded into redbubble and zazzle so that they can be bought by readers. Now the bird art is available as prints on various products such as t-shirts, mugs, bed cover, clock, tote bags, iPhone cases, water bottlles and etc. Please, have a look at them at these links: Redbubble Birds, Zazzle Birds. I hope that you are interested in buying some of them.
at December 21, 2019 No comments:

Email ThisBlogThis!Share to TwitterShare to FacebookShare to Pinterest
Labels: bird

Magnificent Riflebird (Ptiloris magnificus) lives in lowland and lower montane forest of West Papua. The chest and the breast shield are iridescent blue. There are several places which tourists can go to watch the bird of paradise, i.e. Asbaken village of Sorong regency, Weyos beach and Fef town Tambrauw Regency, and Susnguakti forest of Manokwari. This bird is an important target in a list of birds that visitors want to see while exploring the tropical rainforest of West Papua.
Male Magnificent Riflebird performs courtship dance that looks like cheerleader dance to attract his female counterpart.
Birds of Paradise eat fruits and spread their seeds to all corners of the forest. They play important role in growing the forest. The followings are some animals which visitors can watch in lowland tropical rainforest.


Anyone who is interested in tropical birding in West Papua especially in Sorong regency, Tambrauw Mountains and Raja Ampat can contact me by email to: peace4wp@gmail.com by whatsapp to: +6281332245180.
at December 08, 2019 No comments:

Some Photographs of Birds from Warduwer Beach

I went to Warduwer beach again yesterday (1 December 2019). I went there by a motorcycle. A friend of mine who works at a furniture workshop rode the motorbike. I sat at the beak seat holding my camera trying to find any birds along the way to the beach. I wanted to check the progress of the construction of Raja Ampat Flower Resort. Along the road between Waisai town and Warduwer beach, I saw Brahminy Kite, Rufous-bellied Kookaburra, White-breasted Woodswallow, Pacific Swallow, and Pinon Imperial Pigeon.
While I was there, I did some birding. It was not difficult to find birds at the beach. I saw a big Palm Cockcatoo on a tree not far from me. I aimed my camera at the bird and shot it. There was also a Beach Kingfisher that was calling from a tree near the basecamp of the construction workers. He flew to a branch of a tree closer to me. It was a fleeting moment. He was on the branch for less than one minute and then flew again.
I also saw a group of Lesser Frigatebirds high in the sky. Some Pied Imperial Pigeons were busy having breakfast. I made some photographs of them too. It was a nice morning. Some Crested Tern were sitting on the wooden posts at the shallow water of the beach. I carefully approached them and took some pictures. They were not afraid when I was shooting them with my camera. 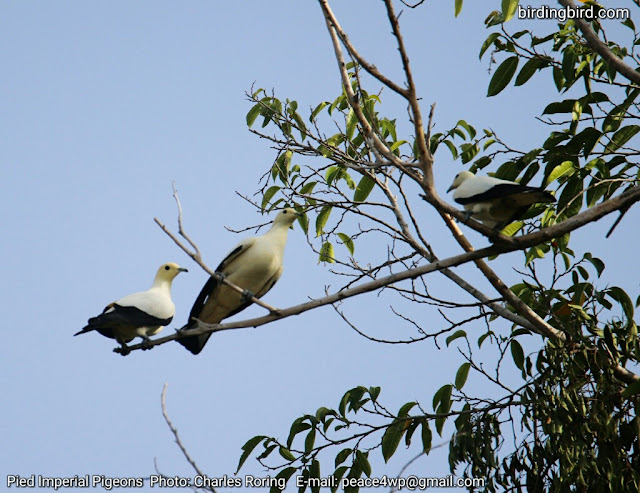 In the afternoon, I did some birdwatching near Waisai harbor. There were mangrove trees near the harbor and birds such as Willie Wagtail, Olive-backed Sunbird can be seen in the trees. I saw a big group of Singing Starling.
The Singing Starling was the last bird that I shot that day.
If you are interested in taking a birdwatching trip to Waigeo island of Raja Ampat and want me to be your guide, please, contact me by email to: peace4wp@gmail.com or by whatsapp to: +6281332245180.