A Merpati jet airplane Boeing 737-300 with 103 passengers and crew on board skidded off the runway of Rendani airport in Manokwari and crashed into a river. The photograph of this airplane was shot by a friend of mine Agus Nauw, a journalist who works for Tabloid Papua Baru. Instead of using digital still photo camera, he only used the photo-smart feature of his Sony Ericsson mobile phone. 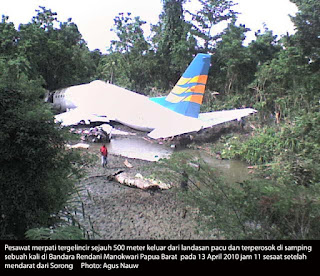 Merpati Crashed into a River Bank in Rendani Airport of Manokwari