The tropical island of Numfor is the natural habitat of hundreds of species of coastal or rainforest birds. The rainforest depends on them as fertilizer and seed dispersers and at the same time the birds depend on the rainforest as their home. Sea birds eat fish. Their feces are very good fertilizer to the soil of the island. This post is my second story about Traveling in Numfor island. The first one was Numfor island Tropical Rainforest and Coral Reef - Part 1.
The three tourists left the ferry boat and walked through the crowd of passengers and their relatives who came to the harbor to welcome them. When we were on the pier, I told Lian Schepers that they should buy some fish for dinner. She agreed with that and bought some fish. Their price was 20 thousand rupiahs. I had to find a car which would bring them to Yemburwo village located in the north of the island.
I finally could find one. After negotiating the price with the driver, we agreed to pay 25 thousand rupiahs per person for the 1.5 hour ride to the district capital of East Numfor. The number of passengers which the car carried was 15 people not including the luggages between our legs and on the roof of the car. Actually the normal carrying capacity of this public transportation is 10 but the driver needed more money to stay profitable in this business by carrying more goods and more people. Personally, I was worried that this over capacity could create an accident but fortunately everything was just fine.
We arrived in Yemburwo village when it had been dark. It was a large coastal village located along the beach of the Numfor island. Mr. Rumbewas who manages the penginapan klasis (that belongs to GKI church) had to repair the water pump and clean and the tub before the tourists could use them for taking a shower. Lian gave the fish to Mr. Rumbewas where they would be fried for their dinner. I left them at around 9 p.m. after informing them that the next morning activity would be bird watching along the road outside the Yemburwo village. When I left them, the fried fish had not come. I stayed in Mr. Yonathan Rumbewas' home. As a host family, he was very helpful.
The next morning, I came to the Penginapan Klasis to meet the Dutch tourists to guide them for a bird watching trip not far from the village. I was accompanied by Hari Wanma, a relative of Yonathan Rumbewas. Lian Schepers told me the fried fish came at 11 p.m. too late for dinner. She gave them to the dogs. At around 6 a.m. we walked to the west of the village. Some of the villagers had come out of their houses perhaps to catch some fish at the beach during the low tide for their breakfast.
Numfor island was a battle ground between the US and the Japanese forces during World War II. While walking along the road that devides the Yemburwo village into two parts, I saw a Japanese World War II Memorial Monument. I shot some pictures of it. I don't know the meaning of the inscription written on the monument but I believe that it was to honor the Japanese soldiers who had fallen on the island during fierce battles against the US forces. 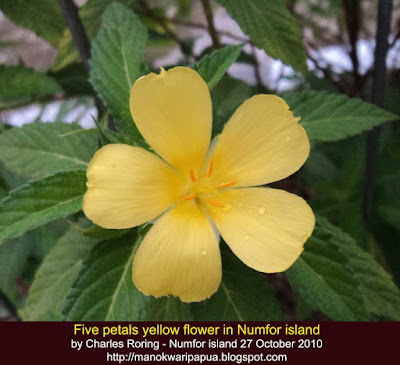 Some birds were flying above our heads. Black birds with white color on their chests and stomachs. They had white eyebrows.  The most common species that we saw that morning. They were Willie Wagtail (Rhipidura leucophrys). They were playing on both sides of the roads on the fences of the houses or on the lower branches of the trees. Two red lories flew to the coconut trees that grow along the beach. They were female Black-capped Lory. I really regretted of not carrying a long lens camera during my tour to Numfor. Next time, when I go to this tropical island again, I will bring a better camera.
We also saw a black bird. It was Torresian Crow. However, I prefered to call it crab eater. The Back bird often landed on the road near a swamp just outside the Yemburwo village. Crabs frequently crossed the swamp. In another occasion, I saw Numfor Paradise Kingfisher in the forest not far from the airport.
Mr. Schepers told me whether they could buy some fruits in the island for their breakfast. When we passed by a house, we stopped and asked an old man who was working as ojek driver (ojek was a motorcycle taxi) to find fruits in the nearby village. He promised to find them for the Schepers. We return to the Losmen Klassis at around 10 a.m. One hour later, the ojek driver brought some papaya fruits. We already had some coconuts picked by Hari Wanma our Papuan tour guide that morning.
Introducing bird watching trips for tourists to Numfor island is important to help the local Papuan preserve the birds there. I see that the population of birds in the island is being threatened due to bird trading. The local Papuan youth catch the birds and sell them to buyers in Biak town and Manokwari city. If more tourists come to watch birds in the tropical rainforest of Numfor island, I believe that the hunting of birds can be stopped. by Charles Roring
Related posts:
Traditional Dancers and Musicians from Numfor island
Mangrove Forest from Numfor Island
Snorkeling and Birdwatching Vacation to Numfor island
Tropical Rainforest of Numfor island - the Battle Ground between the US and the Japanese Forces - Part 3
at October 31, 2010