Between 1941-1944 Japanese occupied New Guinea island including the Numfor island that was still covered with tropical rainforest. Only small groups of Dutch troops that still continued the guerrilla fighting in the surrounding jungle of Manokwari. All of the Dutch troops in the Netherlands Nieuw Guinea had surrendered to the Japanese troops. Entering the 1943 and 1944, the American forces fought back. First they pushed the Imperial Japanese Navy out of Guadalcanal of Solomon islands, and Papua New Guinea. Second they entered Western half of the island in 1944. Hollandia was their first target, then Biak and Numfor islands. The Japanese troops had built air strips in this island and hid in the caves located in the tropical rainforest of the island. To defeat the Japanese, the American forces launched massive bombings and landed thousands of troops. It was not easy for both sides of the warring parties especially for the Japanese.  Many of the soldiers died not because of fierce gun fighting but malaria and lack of food. The Japanese army were defeated easily overwhelmed in number of troops and weapon technology. Well, that's a little story about war in the tropical rainforest of Numfor island.
Also read:
Part 1 Numfor Island Tropical Rainforest and Coral Reef
Part 2 Bird Watching in Tropical Rainforest of Numfor Island 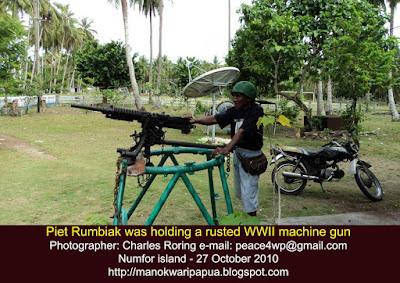 I returned to my homestay after drinking coconut juice at Penginapan Klasis with the Schepers family. The homestay is located at the south of the Numfor airport. It belongs to Yonathan Rumbewas, a Papuan who works as construction worker. He built his house near the tropical rainforest which in the morning is always filled with the sounds of various species of birds. Coconut trees grow around his house creating a peaceful and cool atmosphere. Although during the mid-day the temperature of this tropical island is quite hot, the house stays cool due to a lot of green vegetation around it. The trees of the tropical rainforest absorb the CO2 gases during the photosynthesis and emit fresh oxygen that can be felt in the houses that are located near the forest.
In the afternoon, I walked to the Penginapan Klasis again to meet the Schepers. They were not there. There were at an eating house across from the losmen. I went there to offer another day trip to visit "World War II Museum" at Mr. Simon Wanma's house. They invited me to have lunch in that "rumah makan." I ate rice, carrot and cabbage soup and fried fish covered with chilli sauce. They ate noodle soup. They complained that they could not always eat rice. In addition the chili sauce was too hot for them. So, I decided to ask the woman to arrange food for the next days that is more suitable for them. She agreed to help them by making fried sukun (bread fruit), vegetables, and pisang goreng. With this arrangement, the Schepers could enjoy their food well. 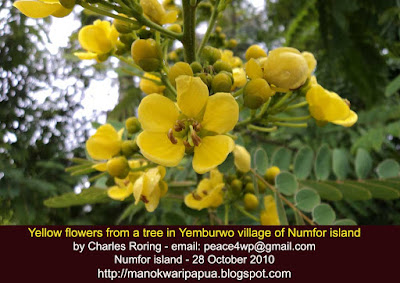 After having lunch, I went out to find a public transportation that could carry us to Simon Wanma's house. I met someone named Piet Rumbiak. He was an old "taxi" driver. His car was a minivan Suzuki Carry. He was glad to meet these Dutch tourists. When I mentioned that Mr. Wally Schepers was born in Manokwari, Piet said that he used to live in Manokwari. 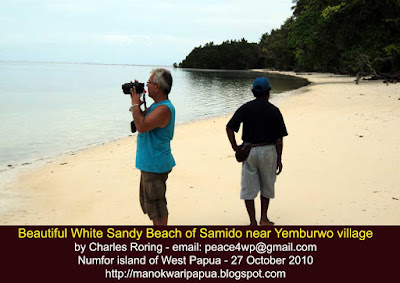 Fifteen minutes later, we were now at the World War II "Museum." Mr. Wanma bought some old machine guns and other ordnance from the local Papuans to avoid them from being sold to old iron buyers where they would be smelted and recycled to produce new metal products. For Mr. Simon Wanma, these old guns and bombs should be preserved for future generations of Numfor people so that they will know the history of the island. Fortunately these rustic machine guns and bomb could not be used anymore. by Charles Roring 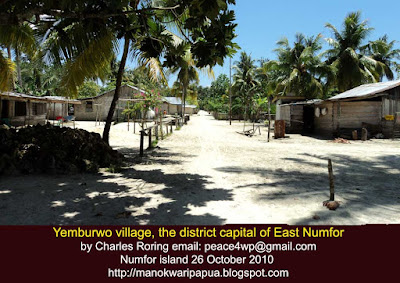