Yesterday, I wrote about Thunder Stones - Rocks from Outer Space. Still about the story of my journey in the rainforest of Kwau village in Arfak Mountains, now I am going to tell you about the golden rocks that I saw in a small stream near Hans Mandacan's home. After taking pictures and hearing Samuel Mandacan's explanation about the medicinal plants, we continued walking until we arrived at a small stream in the ravine where the water was very clear. I immediately took off my camera and my bag and put them in a dry place on a dry ground. After that, I washed my face to freshen my mind up from a very tiring Manokwari - Kwau trip. The cool water really refreshed me. Even though it was an unboiled water, I drank a few sips. I was not afraid of being attacked by abdominal pain. 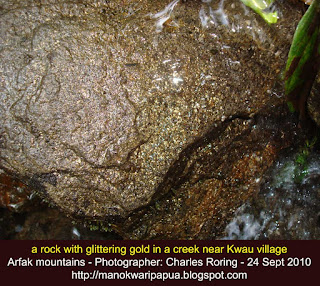 When drinking the water, I saw glittering yellow glow reflected off from the rocks scattered around me. It immediately caught my attention. I went and picked up one stone. The stone was golden yellow. I did not know if it was indeed a sparkling gold or not. 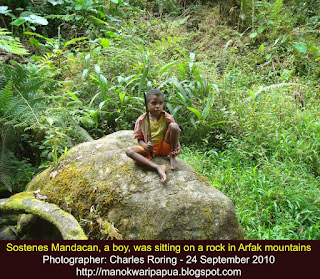 I asked Samuel (chief of Kwau village) whether it is gold or not. Samuel did not know exactly. Wow, there are a lot of such stones along the creek.
Anyway, my tour in Kwau village (on 24 and 25 September 2010) was to assist the local communities in promoting eco-tourism and attracting tourists so that they would be able to generate income from the natural resources which they have without having to cut trees of the rainforest. If more tourists come to Kwau village in Arfak mountains, the villagers will not easily surrender their forest and trees to logging companies. 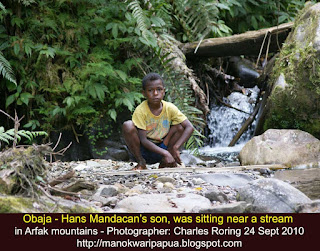 Therefore, I did not want to seek more information about the golden grained stones. I hope that people of Kwau village will be able to utilize their natural resources wisely without being tempted to destroy them.
After returning to the town of Manokwari on 25 September afternoon, I began to launch eco-tourism promotional campaign for this Kwau Village on the Internet. Several articles have been written. The focus of my attention is trying promote herbal medicine or alternative medicine which have been practiced by the Papuan villagers in attracting foreign tourists to the region. There are a lot of medicinal plants in the tropical forests of Arfak Mountains. Even the names of Samuel Mandacan and Yatinus Mandacan as Natural Healers are so famous in the Arfak mountains and Prafi valley as "herbs men" who can cure various kind of diseases, including severe ones such as malaria tropica and cancer. According to Hans Mandacan - my tour guide in Kwau village, general hospital in the city of Manokwari has requested Yatinus Mandacan to work there to help doctors heal patients using herbal medicine techniques. But he rejected the offer because he does not want to live far from where the herbs are. 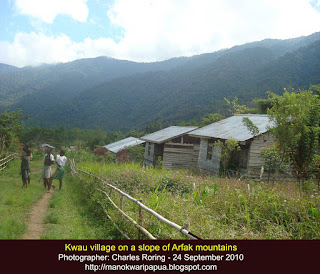 Last night (October 1, 2010) Hans Mandacan visited me again in Manokwari. In our conversation, I asked him to add some explanations about the medicinal plants that I shot using my camera while hiking in the jungle village of Kwau. He added a lot of valuable information. With that information, I can write more articles about herbal medicine for my blog. However, because I am not a botanist, it is so difficult for me to identify the names of the plants in Latin or English. So, please, do not be dissappointed if I only use local names of the plants here.
When presenting the photos to Hans, the golden rocks photos appeared on my computer screen. Hans Mandacan said that there used to be someone who once worked in a gold mine  visiting his village. When he saw the stones in the creek, he said that there is a lot of gold in the rocks of the stream. OMG, how rich they are! 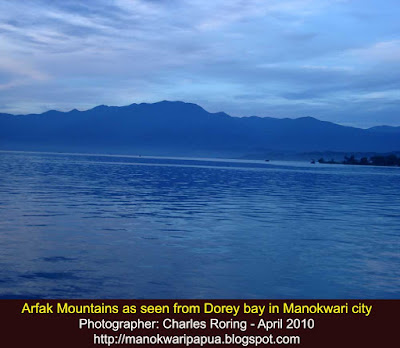 Well, if you're interested in visiting the village or Manokwari city as tourists or nature lovers, you can contact me via email: peace4wp@gmail.com. I will be happy to help arrange your trip to the region.
at October 02, 2010