Tropical rainforest in the mountains and islands around Wasior

Several days ago I uploaded an article entitled, Tropical Rainforest in the Mountains Along the Northern Coast of Manokwari as part of my efforts in promoting the area for eco-tourism scheme that can provide alternative jobs to the indigenous Papuan villagers who live there. This time, I will write about the Wondama bay regency. The recent flood disaster in Wasior town reminds us to give more attention to the preservation of tropical rainforest and on the creation of alternative jobs to the indigenous Papuan people that will not destructively exploit forest and marine environment. Last September before the flood disaster, Pieter Wieringa and his wife, two Dutch tourists, visited the town. They went there to meet their relatives. While in Wasior, his wife took a lot of pictures of the scenery of the islands and mountains that are still covered with tropical rainforest. 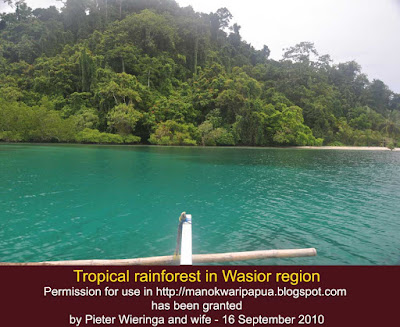 Tropical rainforest and coral reef as the focus of responsible eco-tourism promotion
Before leaving for Bali and then to the Netherlands, Mr. Wieringa invited me to YAT Losmen for some discussions on how we can promote eco-tourism in Wasior through the photographs of rainforest and coral reef or marine environment that are still in pristine condition. He gave me more than 700 pictures of the mountains, the villages, the dark green rainforest and the beautiful blue sea and the islands both in the Geelvink bay and Wondama bay of the Papua island. 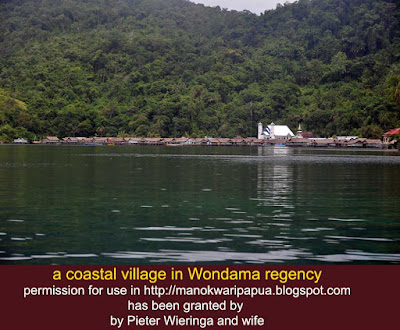 After the flood disaster, I was thinking of postponing the promotion of eco-tourism for Wasior or the Wondama bay regency as a whole because in my opinion, the town will not be ready to receive tourists. It is difficult to develop tourism industry in a town which has just been hit by flood. But I see that promoting the beauty of the coral reef and the tropical rainforest of the Wondama bay regency will bring hope to the people in Wasior and the villages in the region that they still can rely on their natural resources as the source of income through responsible eco-tourism.
I haven't checked or contacted the local authorities whether tourists are still allowed to enter the town because the emergency respond to help the victims of the flood is still going on. After the emergency respond, the restoration efforts to normalize the economy of the town will be started. I think the town will be ready to receive tourists again in January 2010. I disagree with the opinion which says that eco-tourism campaigns for Wasior should be suspended. For me, there are still other villages in the regency that are not hit by the flood. If tourists go to those villages then they will still be able to go hiking through the tropical rainforest or enjoy snorkeling around the waters of some tropical islands in the bay. 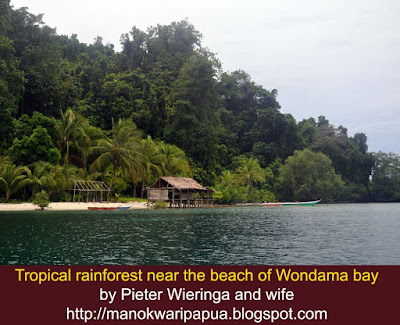 Eco-tourism can provide jobs and reduce deforestation
The financial contribution from eco-tourism will greatly help the local Papuan. I also see that eco-tourism can be considered as trauma healing scheme. People should see their nature as friend and not as an enemy. Tropical rainforest in West Papua is facing the same problem as the tropical rainforest in Amazon region of South America. Forest clearing for palm plantations and timber exploitation really threatens the island. It is not only Wasior whose rainforest is being cut. Logging also occurs in almost every part of the New Guinea island the meet the domestic and international demand for wood that is used in construction and furniture industries.
This afternoon, an old friend of mine visited me. We have not met for around 18 years. He came to Manokwari city with a team of volunteers from Bandung who will go to Wasior to help the victims and refugees who are still living in the small town. During our 3 hours discussions, I explained to him a number of alternative schemes which we can do to help the Papuan people develop their economy without destroying or overly exploited the enviroment. He agreed with the idea saying that he also wants to develop agro-tourism for Manokwari. He said that he is now thinking of moving back to Papua for realizing his dream. Actually he is a Papuan who was born in Manokwari. He also grew up here but now is working for an NGO in Java.
I hope that all of us in Papua and around the world take the Wasior flood as a very expensive lesson and begin to change our lifestyle to be more friendly to our environment.
Last November, I, and Monique - a volunteer of SDSP foundation, visited the refugee camp of Wasior flood victims at the Tanjung BLK of Manokwari. I met a young man named Jackson. He could speak English well - at least for simple conversation. His grammar was also good compared to other youth of similar age to him. When having a conversation with him about ecotourism, I had an idea of appointing him as guide for tourists who want to travel around Wasior to see the beautiful nature of the tropical rainforest and the mountains of the Wondama bay regency. He is very potential to work as tour guide and he is willing to learn about the environment.
If you are interested in visiting Wasior or Wondama bay regency to go hiking in the forest or enjoy snorkeling among the coral reefs of the islands in the bay, you can contact me - Charles Roring - via email peace4wp@gmail.com for more information about it. I'll be happy to arrange a trip for you to the region.
Also read:
Tropical rainforest preservation in district Senopi
Tropical rainforest of Arfak mountains
Birds from the tropical rainforest of Manokwari Papua
Tropical rainforest a great tourist attraction in Manokwari Papua
Arfak mountains
Watching beetles in the tropical rainforest
at October 21, 2010