Numfor island is located in the Cendrawasih or (Geelvink) bay of Papua island. Papua is also called New Guinea - the largest TROPICAL island in the world. Numfor as its satellite island is still covered with tropical rainforest which is the home of a lot of species of coastal or lowland birds. Coconut trees and mangroves are the main vegetation of the coastal region. I went there on 25 October 2010 and returned on 29 October 2010. I went by Yap Wairon, a steel boat that is operated by PT. Armada Bandar Bangun Persada - an affiliate of PELNI. This boat can carry up to around 200 economic class passengers. The price of the ticket was Rp. 30,000/person from Manokwari to Numfor. For VIP seats which are fully air conditioned, the price was Rp. 90,000 per passenger.

Because this was my first visit to the tropical island, I hired a Papuan young man named Hari Wanma as my guide. We left Manokwari at 12 midnight and arrived in Numfor at 5 the next morning. When I saw Numfor island from close distance, I could tell that this is the perfect place for tourists who love to see birds and who want to enjoy its beautiful marine environment. 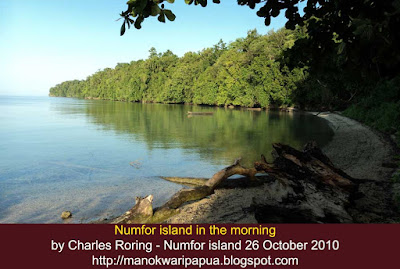 After having breakfast in the harbor, I and Hari went to Yemburwo village by Ojek (motorcycle taxi). I asked the ojek driver to stop several times on some beaches to let me take pictures of the bay, the forest and the birds. I was amazed to see a lot of birds along our trip from the ship harbor to Yemburwo, the district capital of East Numfor. 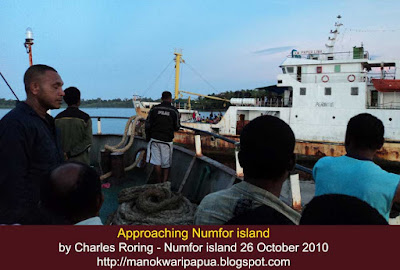 The night before going to Numfor, I sent a text message to Lian Schepers whether she and her uncle and aunt were interested in going to Numfor island. She said they were discussing this matter. Hari took me to his uncle and aunt's house where I would stay there with him for three days. I paid 150 thousand rupiahs for the three-day stay. It was located some one hundred meters from the airport. Numfor island in the morning was very quite. Different from Manokwari that is usually busy with cars and motorcycles of parents who bring their children to school and of government employees who go to work, Numfor island was only filled by the sounds of waves and birds.
After taking a rest and eating breakfast, I tried to call Lian again. She said that they were now at Manokwari ship harbor asking information about the ship that would leave for Numfor that morning. Several hours later she sent another text message that they were on board of Kasuari Pasifik (a roro vessel which is a ferry that connects Manokwari, Numfor and Biak). They would arrive in the afternoon at around 5 p.m.. I took the opportunity to make a little survey around the island. First I met Mr. Fredy Rumbewas - the "manager" of Penginapan Klassis Numfor to arrange the accommodation for the Dutch tourists, Second, I rent a motorcycle for that day eco-tourism survey trip. The motorcycle was not really in good condition. Hari broke its brake so, I had to pay 150 thousand rupiahs for the rent and the broken brake. In addition I had to pay Hari another 150 thousand rupiahs for being my guide in Numfor.

I went to Amberimasi to see an unfinished Losmen constructed by Mathias Rumbruren and his relatives for tourists. When I got to the losmen, it was actually not ready to receive tourists - no electricity, no food and no furniture. It was only an empty but nice bungalow located at an idylic bay of Amberimasi lagoon. There is a small island across from the lagoon. I forgot its name People can walk to the lagoon when the tide is low. After interviewing Mesakh Rumbruren - an elder brother of Mathias Rumruren who is now a teacher of a vocational high school (SMK) in Manokwari, I continued my trip to the Ship Harbor to meet Wally, Trudy, and Lian Schepers - three tourists from the Netherlands. I arrived at the harbor at around 3 p.m. I stopped by the "cafe" where I met Mr. Bowo Adi. A mountain bike enthusiast who had just finished cycling around the Numfor island. We had a deep discussion with some Papuan who were also waiting for the ferry about how to develop eco-tourism industry in Numfor island and Papua island as a whole. I said that I was very interested in introducing mountain bikes to tourists who want to travel around Manokwari and Numfor as part of my eco-tourism promotional project. He advised me the manufacturers of mountain bikes that are suitable for foreign tourists whose physical weights are mostly heavier than the average Papuan or Indonesian people. It was a nice discussion and we agreed to meet again when I have returned to Manokwari again. 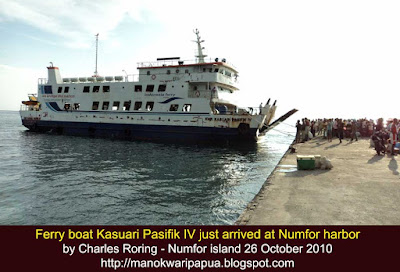 At around 5 p.m. the Kasuari Pasifik ferry arrived. I introduced Mr. Bowo Adi to Wally, Trudy and Lian Schepers saying that he was one of the pioneers of mountain bikers who promote cycling as an alternative transport means of going around Manokwari city. by Charles Roring
If you are interested in visiting Numfor island and need a tour guide, you can contact me, Charles Roring, via email: peace4wp@gmail.com. I'll be happy to arrange your trip to that beautiful tropical paradise. Here in this island, tourists can see birds in the morning and in the afternoon while hiking through the tropical rainforest and along the beach. Tourists can also enjoy snorkeling around the beautiful coral reef both in Numfor and Manem islands.
at October 30, 2010