Wasior before the flood disaster

Wasior is the capital of Wondama bay regency. It used to be a district under the administration of Manokwari regency several years ago. Wasior was a transit town for tourists who want to enjoy scuba diving and snorkeling in the National Park of Cendrawasih bay or Geelvink bay. Now, tourists could not visit the town anymore. Actually they can still visit the park but through a small district town, Ransiki. Early this October 2010, this small town was hit by flood that destroyed most of the buildings in the city after heavy rain in the previous night. Hundreds of people dead and thousands of refugees left the town for Nabire town and Manokwari city - the capital of West Papua province in the Republic of Indonesia.
Environmental activists blame the government for giving to much concession to logging companies that irresponsibly clear the forest area of the mountains behind Wasior town. In reaction to this matter, local and central government officials responded by saying that the flood was caused by extreme weather. It is clear that there is massive logging operation in the area, no doubt about it and thousands of hectares of tropical rainforest have been cleared for precious logs which are needed by industries in Malaysia and China. 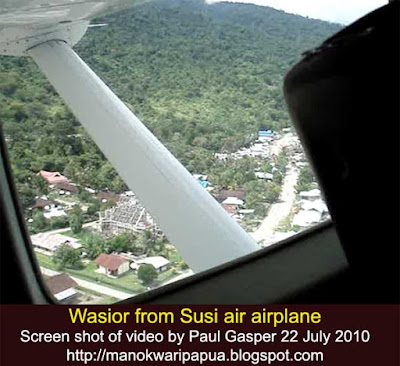 I will not judge people for this disaster but it is the best time for us to review our lifestyle to be more environmentally friendly. If we always travel around our cities with cars or motorcycles, I think we should try to walk or ride bicycles instead. Perhaps while you read this blog, you might say, "Well, I live far from Wasior, why should I care?" Natural disaster can occur everywhere. The global warming and extreme weather that we experience now are said to be the result of the cutting of tropical rainforest and our behaviour in increasingly emitting CO2 gases through our cars, motorcycles or heater and air conditioning machines. 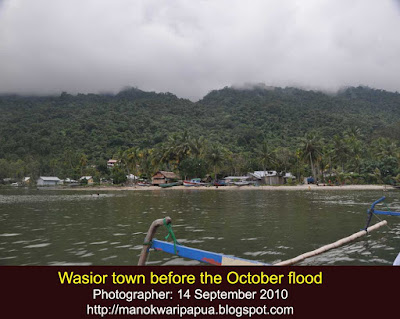 Well, I am not going to discuss the case of illegal logging in Wasior in this article but I just want to show you how beautiful this small town was when the flood had not hit it. Last July a Dutch family visited the town. They were the Labrees. They were accompanied by Paul Gasper a tour guide who just passed away in September 2010. While the airplane of Susi Air was flying approaching the town, he recorded some aerial videos and photographs which I have compiled and put in this blog for all of you to watch. Through this post, I want to express my condolences to all the victims of Wasior flood and their families. by Charles Roring
Also read:
at October 13, 2010