Snorkeling activities can be done in several islands in the Dorey bay, Bakarro beach, and along the northern coast of Manokwari regency. I went to Mansinam island with some Dutch tourists this morning. We enjoyed snorkeling there. Mansinam is a small tropical island. Along the beach, we could see coconut trees. Most of the island is still covered by tropical vegetation. It's amazing to see various species of fish that live among healthy coral reefs. Zebra fish and yellow tail blue fish were not afraid of me while I was taking pictures of them.

Eco-tourism and coral reef
Coral reef is not only important for eco-tourism but also for the environment. Coral reef absorbs CO2 gases which we emit everyday through our daily activities such as riding motorcycle or driving cars. During photosynthesis, the algae Zooxanthellae absorbs the CO2 and release oxygen. So the function of coral reef ecosystem is similar to the function of tropical rainforest. In fact, it is the tropical rainforest of the sea. It takes around fifty years for a coral to reach a size similar to an adult's head. The growth of coral reef  is very slow.  Coral reefs are tiny animals. They are very sensitive to extreme weather condition and disturbances on their surrounding environment. Therefore, we must protect it from destruction. Responsible eco-tourism is expected to help the local fishermen get additional income from the natural resources which they have so that they will not be tempted to use destructive method of fishing such as using bombs, poisoning, and  throwing of fishnets in the reef area.

Problems on waste management in the waters of Manokwari bay
Although Manokwari bay is very beautiful with its coral reef and tropical islands, the city dwellers have not realize its potential. They still irresponsibly throw plastic bottles on the city streets which will finally end up at sea when the rain comes. It is important for all the citizens in Manokwari city to be more responsible in handling their domestic and industrial wastes so that the waters of the Dorey or Manokwari bay will not be polluted anymore. When the plastic wastes pollute the coral reef area, they will blockade the sunlight which is a very important component for the photosyntesis process to occur. The reef will slowly die. In popular term we call it coral bleaching. Bleached corals  look white and are dead corals. They cannot provide food to the fish. Then the number of fish will go down. It means the food stock in the area will automatically be affected. Fishermen have to go further away to the sea to catch fish. They will spend more fuel for that purpose. As a result the price of fish in the market will be higher than what we usually pay now. 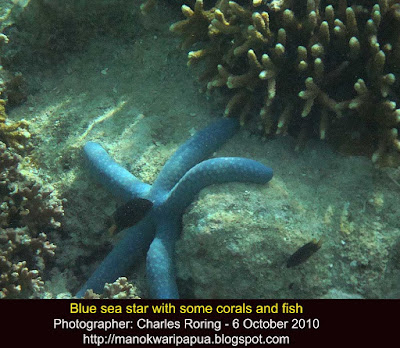 Coral reef aquarium industry
In addition to waste management, there is another thing which really attracts my concerns. The taking of corals from its habitat for making coral reef aquarium is absolutely a violation of law. Unfortunately the people who are responsible for the destruction of the reef have not been punished. The police and the government should enforce the law which is aimed at protecting and preserving the reef so that we can still have one of the most important marine ecosytems for current and future generations. 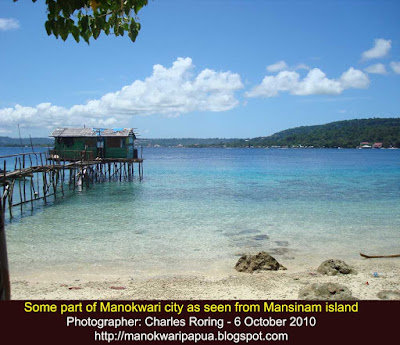 Other places that are nice for snorkeling are the Raimuti island, the coastal area near the mountain range of Arfak and  Kaki island. If you are interested in visiting Manokwari as a tourist who wants to enjoy snorkeling and sightseeing, you can contact me, Charles Roring, via email: peace4wp@gmail.com. I will be happy to arrange your trip in this area.
at October 06, 2010