A few days ago I accompanied 5 Dutch tourists traveling around Mansinam and Lemon islands. We enjoyed snorkeling in Mansinam island. Although Mansinam is only a small island, it is still covered with pristine tropical rainforest. The weather was very clear at that time. We were able to take very nice pictures of coral reef and fish. The fish were colorful and were not afraid to be near us. 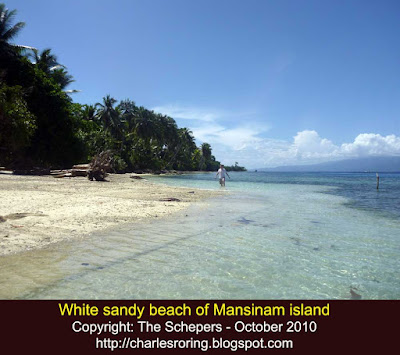 After snorkeling, we continued our trip to the house of Peter Rumbruren, a Papuan artist who used to go to the Netherlands as part of a group of Papuan artists who performed traditional dances in Pasar Malam. Unfortunately, Peter Rumbruren was not at his home. We could only meet his wife and children. She picked some coconuts and opened them for us. The coconut juice was very delicious when we were drinking it that afternoon. 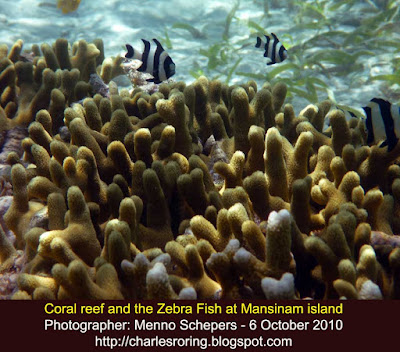 We were at Peter's house for around one hour and then we had to continue our trip that day to Lemon island. This time we did not swim or snorkel around. Instead we met an old Papuan who collects plastic bottles along the beach of Lemon island. His name is Jordan. He was raised by a Dutch family when West Papua was still part of the Netherlands colony. Wally Schepers, one of the Dutch tourists, gave special attention to his works. He welcomed us in his wooden house that is facing the beach. Wally took a chance of interviewing him a little about his motivation in collecting the plastic bottles, aluminum cans and glass bottles that are thrown by city dwellers in Manokwari and end up at the beach of Lemon island when the rain comes. Oom Jordan (his nick name) says that he collects the bottles to keep the beach clean. But he does not go to the city to sell the wastes. Sometimes people come to the island to buy them and resell them to a buyer in the city near the Wosi market. 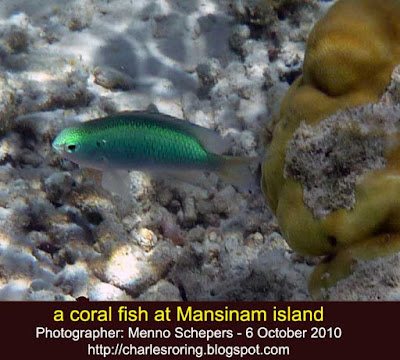 Pak Jordan showed his enthusiasm when discussing ways to clean the waters of the Dorey bay of Manokwari and the islands. During the World Cup Football Season, he installed a big Dutch flag at the top of a tree near his house. The Dutch flag is still flying there now. Many Papuans still have the Dutch flags at the roofs of their houses or at the top of trees until now although the World Cup season in South Africa has been over for months. He planted 4 trees tens of years ago when the island was not crowded by people. Now the trees have been big. Pak Jordan explains that the planting of trees along the beach is very important for protecting the beach from erosion. He looked sad when saying that other people in the island have not followed his efforts in keeping the beach clean. 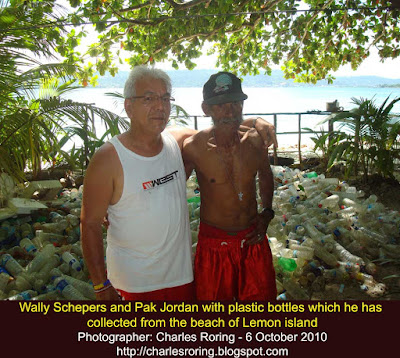 The Lemon and Mansinam islands are surrounded by beautiful coral reefs that are "the tropical rainforest of the sea." They look strong but actually they are very vulnerable to marine pollution. If plastic bottles and tote bags drift to the area and cover the corals, sunlight cannot reach them. Algae that live on the surface of the corals cannot do the photosynthesis. This greatly affects the production of food for fish and marine animals living in the coral reef area. It also undermines the absorption of CO2 gases that we emit every day.
It is important for the local government to have a comprehensive waste management program that encourages the city dwellers to fully participate in the collection of wastes so that marine pollution in the waters of Dorey bay can be reduced. 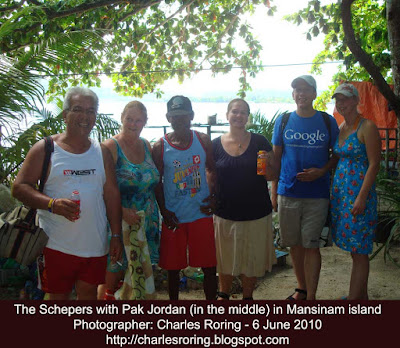 With its current status as the capital of West Papua province in the Republic of Indonesia, Manokwari city is now experiencing rapid development. This triggers urbanization. People from other small villages and towns near Manokwari flock to this city. Even migrants from Java, Maluku and Sulawesi come to this coastal city to find jobs. The amount of wastes is definitely increasing in this city. It is now time for the government and the citizens to join hands to clean the city, beach and waters for protecting and preserving the coral reef in the Dorey bay before it is too late. 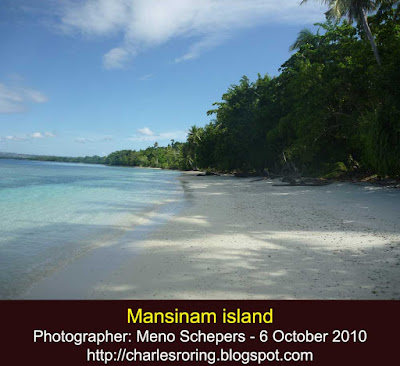 Manokwari city is one of the most beautiful cities in the world. Every month tourists come to this city. If we are serious in developing this beautiful city as a leading player in eco-tourism that provide jobs to a lot of people and generate income to Papuan people living both along the coastal and mountainous region, the problem of plastic bottles and other industrial and domestic wastes that are now scattering all over the city and floating on the surface of the sea inside the Dorey bay has to be solved immediately. by Charles Roring
Also read: Underwater Photograph of Coral Reef in Mansinam island
at October 12, 2010