Papuan children wave surfing at the Abasi beach of Manokwari

Regular visitors of this blog know that I like mountain biking on the afternoons. This time I want to share my little story of riding my Polygon Cozmic Dx 2.0 - a Dirt jump bicycle this afternoon to Abasi beach just around three kilometers from Pasir Putih beach. I started pushing my bike out of my house at 5 p.m. and began cranking it up along the Brawijaya street (formerly known as Panorama-weg when West Papua was still called the Netherlands Nieuw Guinea). I stopped for a while at the Pasir Putih beach to buy a bowl of rujak - a spicy fruit salad. The lady who sold the rujak put it into a plastic bag which I then tied to the handle bar of my bike. I would eat it at home. After that I continued riding my bicycle to Arowi area where usually many children will call me, "mester-mester", or "sepeda gunung (mountain bike)." Arowi is a crowded new settlement area which the local government of Manokwari regency had built for victims of Manokwari Tsunami that happened several year ago. 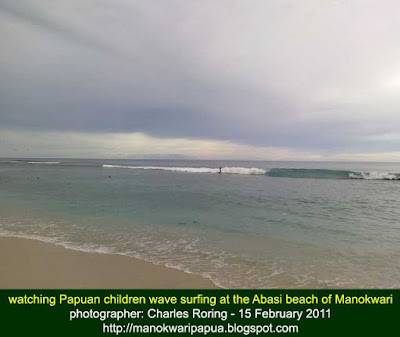 I did not plan to stop at the Abasi beach initially. I planned to ride my bike to Cape Bakaro but then I decided to stop at the Abasi beach after seeing some children in the middle of the blue sea wave surfing with their simple wooden boards. I turned right and headed to the beach. I stopped under a coconut tree just a few meters from the breaking waves. The children did not know that I was watching them.
I was sad to find out that I did not bring my digital still photo camera - Sony DSC-W310 at that time. I only had a cell phone in my pocket. I immediately took it out and activated its camera feature. It was a Nokia Xpressmusic 5630. Its digital camera does not have the optical zoom device. So, I could only take pictures of these Papuan children doing the wave surfing without being able to magnify their actions into my photographs. To get clearer photographs of their actions, I walked closer to the beach near the breaking waves. But I had to walk back several times to avoid myself from being washed by the waves. Then the Papuan children were able to see me taking pictures of them trying to be on top of the wave slopes with their very simple wooden surfboards. They were calling me, "mister, mister" I smiled at them and waved my right hand to them.
After taking some pictures of their wave surfing actions, I walked back to my mountain bike again. I decided not to continue cycling to Cape Bakaro. The scene of the Papuan children wave surfing at the Abasi beach was a good view that I had that afternoon. When I was leaving the beach, they called me again, "mester-mester, besok lagi (meaning mister-mister, tomorrow again)." Then I replied to them, "Ya, besok lagi."
When I was a child, I used to try wave surfing at Amban Pante beach in the north coast of Manokwari. The waves there are bigger between December and February than the ones that I saw at Abasi beach but more dangerous due to the big rocks that are scattered around the shallow waters of the beach. I will go back again tomorrow to the beach for taking pictures of these Papuan children doing their wave surfing actions. I will bring my digital camera, of course. These very potential Papuan children can one day become natural world class wave surfers should they receive supports from the national committee of Indonesian sports (KONI) in the form of better boards supplies and proper guidance from experienced athletes. For advanced surfing techniques, I think, they will be able to master them naturally.
Abasi beach is not as popular as the Pasir Putih beach but it is a good destination for those who are brave enough to conquer the waves of this tropical island.  by Charles Roring Also read: Mountain bike tour to Cape Bakaro
at February 15, 2011