Today is 5 February 2011. It's a big day in Manokwari. Thousands of people gathered in Kwawi to celebrate the 156 anniversary of Gospel Preaching Day. On 5 February 1855, two European evangelists C.W. Ottow and Geissler landed on a beautiful tropical island, Mansinam, to preach Gospel to the indigenous Papuan people. 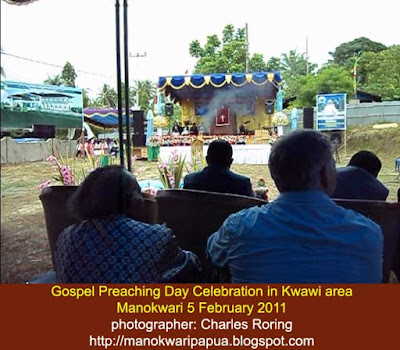 This morning, I attended the GKI in Papua land service. The great-granddaughter of Ottow, Mrs. Minneke Ottow, and the great-grandsons of Reverend W.L. Jens also came to the service.  Thousands of Christians who came from all corners of Manokwari city as well as other regencies in West Papua attended the church service in Kwawi and Mansinam island that day.
After the service, the committee of the event gave the opportunity to Mrs. Minneke Ottow and Mr. Renier Jens to go to the front stage for giving a little speech about their ancestors' works in the Papua land in preaching the Gospel and how they feel about the anniversary. As an interpreter, I went to the stage together with them. At the end of the speech, Mr. (Renier) Jens gave a book that is the diary of their forefather, Rev. W.L. Jens, who worked in Mansinam, Kwawi, Andai and Doreh from 1877 to 1899. Mr. W.L. Jens' wife and his son died in Manokwari. He worked as priest and doctor. We tried to find the grave of Mrs. Jens on the 4 of February in Amban but we did not succeed. The old missionary house, the church was destroyed by the Japanese during World War and have never been restored again.
In his sermon that morning, Rev. Dr. Mawene who led the service stated his concerns over a number of issues such as the environmental degradation and the rapid spread of HIV AIDS in West Papua. He said that parents must control their youth so that they will not be trapped in free sex lifestyle otherwise the whole next generation of Christians in Papua will die and no one will take care of this land anymore. Youth must adhere to alcoholic and sex abstinence. He also urged Christians especially the women to wear proper dress in their daily activities to protect themselves from becoming victim of rape, or sexual harassment or abuse.
Every 5 February thousands of people go to Mansinam island. Although it is a religious festival, it is also a kind of picnic for the city dwellers who want to enjoy the day which is now an official holiday in West Papua. They usually visit the foundation of the old church, van Hasselt's well whose water is believed to have a healing power for curing various kinds of diseases and see the village of Mansinam.
Foreign tourists often go snorkeling or hiking in the southern area of the island. As the largest tropical islet in Doreh bay, Mansinam is now facing environmental degradation due to the continuous flow of plastic wastes from Manokwari that lands on its shore every day.
At 4 p.m. I guided the Jens to the Japanese War Memorial Monument in the Table Mountain, to Manggoapi slope, to a slope below the Bupati's house, and to SOGUN (Sowi Gunung) Hill near the DPRD office of Manokwari for taking some pictures of Manokwari city, Doreh bay and Arfak mountains. Tomorrow (6 Feb 2011), the Jens will leave Manokwari for the Netherlands whereas Mrs. Minneke Ottow and her husband, Henk will still be here until 10th February 2011. by Charles Roring
Also read: Gospel Landing Day
at February 05, 2011