Yesterday I rode my mountain bike through the rainforest of Table Mountain twice. For the first round I used Polygon dirt jump Cozmic dx 2.0 whereas for the second one, I paddled the Celine 3.0. The road leading to the entrance gate of the mountain was quite steep. I had to adjust the front and rear gears to level 1 to climb it. It was quite exhausting especially after I arrived at the gate. The road condition after the gate was rough and steep. I tried to rode my mountain bike up the mountain but my rear tyre slipped. I had to get off my bicycle and push it up the slope. Around two hundred meters after the entrance gate, the terrain was moderate again but still rough. Also read: Mountain bike tour in Manokwari. 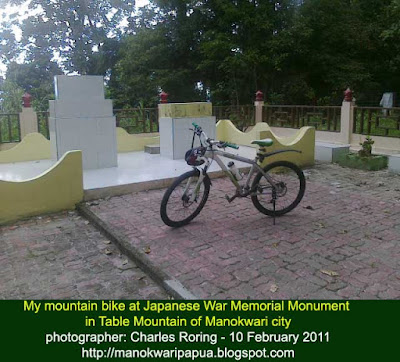 This time I was cycling down a little before meeting the flat road of the Table Mountain. When going down the little slope, I nearly fell of my bike because there were stones whose diameter was bigger than ten centimeters. After that, the road in the rainforest was quite good again. I sat down for a while on the stone bench to take a deep breath. Then I took out my cell phone to activate its digital camera feature. I took some pictures of my mountain bikes. I thought it would be more interesting to attach some pictures of this afternoon mountain biking tour in this tropical rainforest when I write a blog post about it. I saw some plastic wastes on the floor of the monument so, I picked them up and collected them on one place. I hope that other visitors of the monument would do the same to keep this Japanese war memorial monument clean. Several minutes before I continued cycling through the rainforest, I saw a Papuan came to the place where I was taking a rest. He liked to walk in this rainforest. I used to meet him last year when I was guiding a European tourist, together with my friend Paul Warere. We talked a little. I stated my concern about the plastic wastes and alcoholic bottles which forest goers like to through around the forest. These wastes really make the tropical rainforest of the Table Mountai of Manokwari look dirty. He also agreed with my opinion and began picking up some wastes. 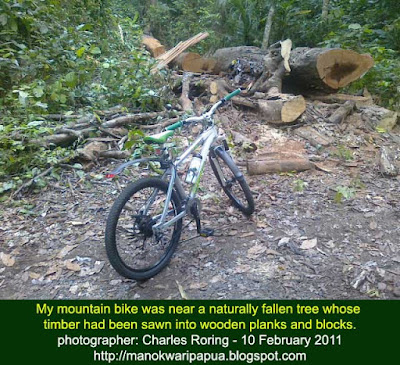 Then I got on my mountain bike again and continued cycling. The air inside the forest was really cool. I like to be inside the forest whose canopy protect me from direct sunlight. I saw some wooden planks that had been sawn from a naturally fallen tree. As a nature lover, I fully support this exploitation method. We can harvest the wood or timber from the rainforest but only from the trees that have fallen naturally. There are a lot of trees in the rainforest of the Table Mountain which have fallen naturally. We can cut them using chain saw to make blocks and planks that are needed for house construction. It took around ten minutes to reach the Japanese war memorial monument. I stopped at the monument for around twenty minutes to take a rest and to enjoy the scenery of the surrounding green trees of the tropical rainforest. Department of forestry can charge tax from these timber blocks and planks from people who extract them from the rainforest.
What I don't agree or reject is the exploitation of wood from trees that are still standing on the ground.
My mountain bike tour through the rainforest of the Table Mountain of Manokwari city lasted for around three hours. I was exhausted by that but I really enjoyed it. I think I will do it again next week. This afternoon I rode my mountain bike again but to Cape Bakaro, my favorite cycling route. I have written some stories about them in this blog. If you are interested in reading them, you can read my post: Mountain bike tour to Cape Bakaro. by Charles Roring
at February 11, 2011