Mountain Biking as Healthy Lifestyle in Manokwari of West Papua

I have been promoting cycling or in another term Mountain bike tour in Manokwari since December 2010. I am not alone in doing this. There are hundreds of mountain bikers who have started this healthy lifestyle. One of them is Mr. Adi Bowo. I met him for the first time when I visited Numfor island. He was taking a rest at a coffee hut near the ship harbor of Numfor. I entered the hut to order a glass of hot coffee. Well, before continuing my discussion about mountain bike and cycling. I would like to explain a little bit about the term "a glass of hot coffee." When I was learning English, I read that western people use cup for hot coffee or milk and glass for cool or cold drinks. Unfortunately, cup is not always available in coffee hut. I call it a hut because it was a hut not a cafe. So, the Papuan woman who served coffee in the hut gave me a glass of hot coffee. 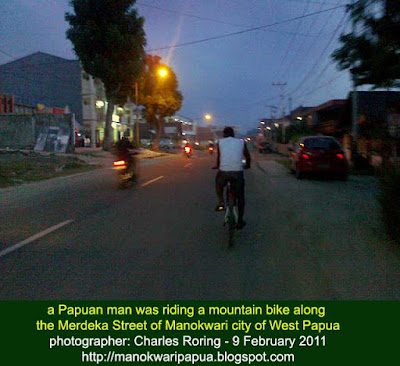 Back to the story of mountain biking in Numfor, yes, Mr. Adi Bowo explained how important it is to promote cycling in Papua for people who want to enjoy the natural beauty of this tropical island. He added that some cycling groups had been formed in Manokwari. Some of them are bike to work which was established by employees of the governor’s office, and cycling community from Bank Mandiri. During our conversation that afternoon, I stated my interest in promoting cycling and mountain biking both to city dwellers of Manokwari and tourists who come from abroad. I planned to buy some mountain bikes which I would use for traveling with tourists through the tropical rainforest of West Papua. West Papua as part of New Guinea island - the largest tropical island in the world, has got vast area of rainforest that is rich in biodiversity. The best way to enjoy this green beauty of the tropical region, besides hiking, is by mountain biking. I have arranged a number of routes which tourists can cycle through while traveling in Manokwari. Some of them are as follows:
Because Manokwari stretches along the Dorey bay whose terrain consists of flat land and hills, the most recommended bicycles that cyclists should use are mountain bikes that are equipped with 18 to 27 or 30 speed gears (mostly supplied by Shimano). For Manokwari city tour, the best time to do the cycling is early in the morning at 5.20 a.m. at this time, cyclists can ride their mountain bikes around the city without much disturbances from motorcycles and cars.
After cycling regularly in the afternoons for nearly three months, I begin to notice that more Papuans are now doing the mountain biking too. This is a good sign because when the indigenous people especially the adult ones ride bicycles, they have directly shown good example to other Papuan about how important it is to keep their body healthy by adopting cycling as their daily lifestyle. When there are more children, and adults ride bicycles to schools or to work, the atmosphere of Manokwari city will be cleaner. by Charles Roring
at February 12, 2011