Tropical Rainforest as the Source of Papuan Music Inspiration - Part 4

The tropical rainforest of Numfor island is not only the source of food but also the source of art inspiration. Papuan musicians have created songs as part of their appreciation and love to the beauty of the nature and the rainforest. 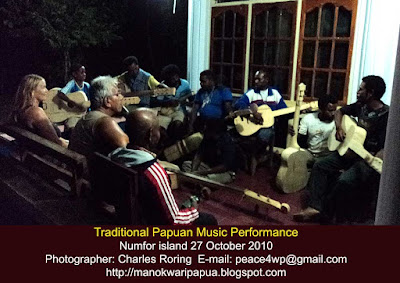 When we went to see rusted machine guns and bombs which were World War II ordnance left by the American and the Japanese forces, we saw some traditional Papuan guitars at Mr. Simon Wanma's house. According to his explanation, the Papuan musicians like to come to his house at night to practice playing and singing their traditional songs. I found it interesting so I suggested to the Schepers whether they would come at night. They agreed that after eating dinner, they would come to see the "traditional Papuan music performance."
At night around 9 p.m. we walked to Mr. Simon Wanma's house again. After fifteen minutes walking, I told the Schepers that I need to stop by Piet Rumbiak's house to meet him for arranging the next day trip to Manem island where we would swim and snorkel around the coral reef which is the tropical rainforest of the ocean. So, I stopped at Mr. Rumbiak's house whereas the Schepers continued walking to Mr. Wanma's house.
Mr. Rumbiak was talking on the phone near the beach at the back of his house when I arrived. A few minutes later, we were discussing things related to our next day trip to Manem island. He suggested that we buy gasoline and oil in Yemburwo village before going to find a boat in villages that are located closer to the Manem island. When everything had been settled or arranged I left him for Mr. Wanma's house. It was not far and I only needed less than five minutes to find the house. It was quite. The Schepers had just been there less then five minutes too. I thought I walked faster than them. Well, the music performance had not been started. Perhaps it was because of the rain that was pouring over the village one hour ago.
Mr. Wanma went out of his house and told some of his assistants to call the musicians. They quickly rode bicycles to find the musicians and brought them to Mr. Wanma's house. Around fifteen to twenty minutes later, most of the musicians came. They set their instruments and made some preparations for the night's performance. I was amazed to see that they didn't need a lot of directions from their leader. Mr. Simon Wanma was their tribal leader but he might not be a musician. So, there has to be a leader among the music players but I could not find which one he was.
First they started playing their music instruments. All of them look like guitars but each has different size and function. Bass player was sitting on the floor with a cigarette between his fingers. They were playing and singing for around thirty minutes without any brake. It's amazing. Their songs are messages to Papuan especially the Biak tribe to love their lands, their tropical rainforest and their sea. The tropical rainforest and its surrounding nature is home not only to the animals but also to them as the indigenous people who have been living in the Biak, Numfor (Schouten) islands for generations.
After listening to the songs, Wally Schepers sang one song (in English language) to them. Before going back to the losmen of Klasis Numfor, the Schepers said that they would try to invite these musicians to the Netherlands. by Charles Roring
Also read:
Part 1: Traveling to Numfor Island: Tropical Rainforest and Coral Reef
Part 2: Bird watching in tropical rainforest of Numfor island
Part 3: Tropical rainforest of Numfor island the battle ground between the US and the Japanese forces during WWII
at November 01, 2010