Watching Beetles in the Tropical Rainforest of Manokwari

Every time I go to the Table Mountain, I will always find new and interesting things. They can be birds, plants, mushroom, flowers and etc. One of them is the wonderful world of insects. Along the asphalt paved road that divides the forest, we can see various butterfly, beetle, grasshopper, weevil and crickets. I am not an entomologist or insect expert so I cannot identify the species name of all the insects that I see in the jungle. One day, I walked with two tourists from Belgium. They were Wim and Vicky Boyden. We did some bird watching and Vicky managed to shoot some photographs of hornbills eating the nutmeg fruits in the tropical rainforest. It was morning time and we decided to continue our walk deeper into the pathway that led us to a large cave at the north of the Table Mountain. 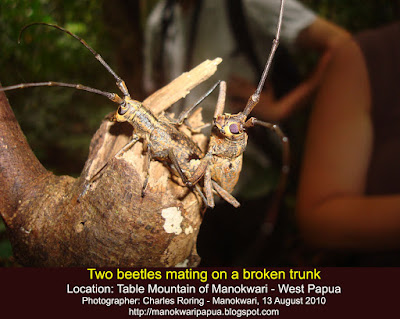 At around 500 meters from the cave, we saw two insects. They were mating. I think they were beetles. Because their colour was dark brown, similar to the tree bark where they were attached to, I didn't see them. Vicky shouted, "Hey, look at this!" I stopped and turned to see what she had been trying to show. I moved closer and saw the two beautiful beetles that were mating. I took out my digital camera. It was a Sony Cybershot and shoot them. I didn't aware that there were beetles on my right side when I passed by a small tree whose trunk had been broken. 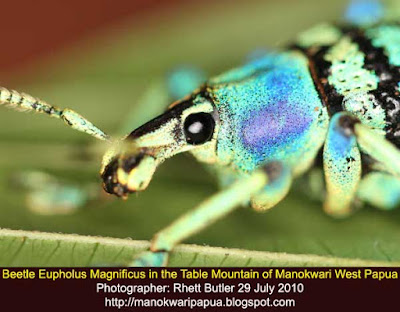 One month before that I was also hiking through the forest of the Table Mountain with Rhett Butler. He was looking for a beetle named eupholus magnificus. He had sent me an email about his intention but I was not sure if we could find it in the tropical rainforest of this small flat mountain. It was nearly dark when we decided to leave the forest and walked back to my Losmen Kagum. Rhett Butler, the founder of mongabay.com - the website that promotes efforts and policies on rainforest preservation said that if he was not able to find the beetle in this mountain, he would go to Biak. When we were about to reach the asphalt road, suddenly Rhett shouted, "Hey, look at this!" I stopped and looked back. There it was, the eupholus magnificus a very exotic beetle, the living jewel of the tropical rainforest of the New Guinea island. Rhett was very happy to see it. He took it with him back to the Losmen Kagum. After taking some pictures of it, he and I walked by to the foot of the Table Mountain to return it to its original habitat. 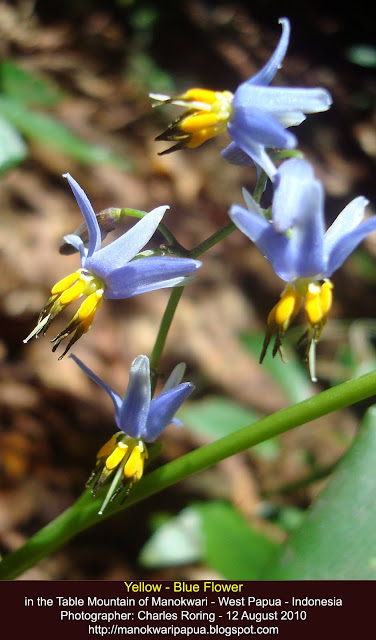 Besides taking pictures of these wonderful insects, I shot some nice flowers that I saw along the way to the cave. There are a lot of species of flowers in the forest. Their colors can be yellow, red, white, blue, purple and various other combination of colors which you can mention. These flowers provide nectar both to the insects and birds that will usually come in the morning. 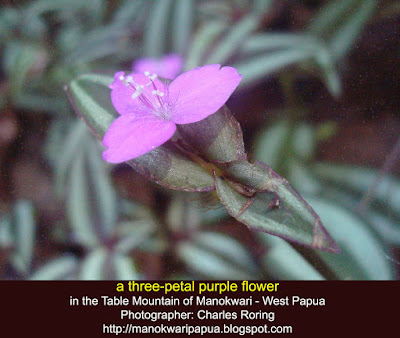 The tropical rainforest in West Papua is an important ecosystem in the world. Its high biodiversity should be protected and preserved for future human generations and for the whole ecosystem of the rainforest itself. With more tourists coming to Manokwari, I hope that we can help the Papuan indigenous people earn some reasonable income the the goods and services that they provide so that they will not give up their land and forest to greedy investors who are only interested in eliminating thousand years old tropical rainforest with their 35 year old palm oil plantation that gives little or no benefit to the Papuan people. by Charles Roring
Also read:
Night Walk in the Tropical Rainforest
Tropical rainforest of Arfak mountains
Tropical rainforest preservation
at September 09, 2010