If you are somebody who likes bird watching then you have come to a webpage about birding in Manokwari regency of West Papua province. I visited Senopi, a small district, in Tambrauw mountains last August 2010. I went there as a tourist guide who accompanied Wim and Vicky Boyden. They were tourists from Belgium. This was their second visit to the region. We were there for one week. Senopi village is famous for its birding hill called Aiwatar. To reach the hill, we have to wake up early in the morning - when it is still dark and walk for around 4 to 6 hours. Please, read my other article Birding Center in Aiwatar hill of District Senopi - Manokwari regency - West Papua province, the Republic of Indonesia. 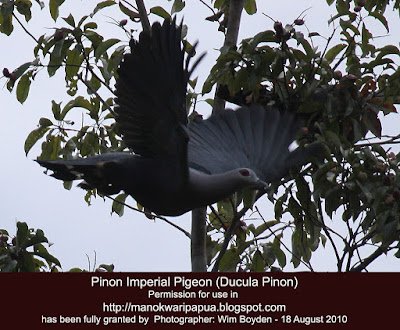 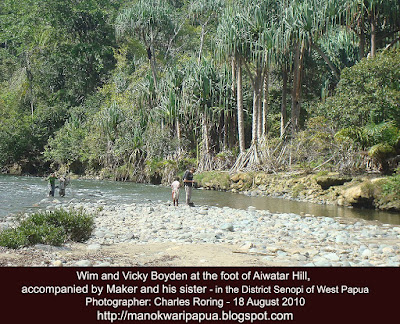 We woke up early but our local birdman was sick so we returned to the guest house again. At around 8 a.m. the local guide came to pick us up. So, we took our bag, digital camera and some food and began our long walk to the hill. We crossed several small rivers, gardens where the local Papuan grow caladium (taro), sweet potatoes and vegetables. Up in the trees, black capped and rainbow lories were singing to welcome the bright morning. We stopped for a while and Vicky took their long lens Canon Eos SLR camera to shoot those birds. 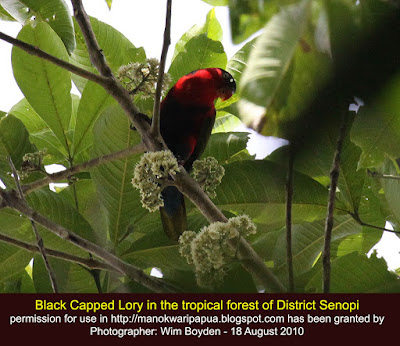 They looked beautiful and didn't seem to be annoyed by our presence. After taking pictures of these birds, we continued walking again. We had been trekking along the bank of Kamundan river for one and a half hours when we suddenly heard the barking sound of a dog. It was barking at a big deer. It was far from us, around 300 meters. Wim took out their camera again trying to shoot them. The deer was moving away. The result was a blurry photograph. On our right was a creek and on our left was the big Kamundan river. It was not long after we saw the deer when suddenly again we heard a group of wild ducks fluttering their wings and flying away. Perhaps they thought that we were hunters who wanted to shoot them. 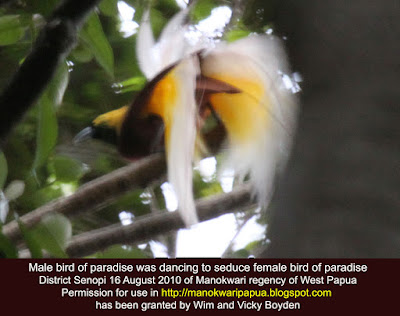 The footpath between Senopi village and the Aiwatar hill was flat. Endurance was all that we needed to accomplish our long journey. Finally we arrived at a place that was located across from the hill. This time we had to cross the Kamundan river. The surface of the round granite stones was slippery. Maker our local birding guide cut some plants to make them as canes for Wim and Vicky. Maker was not alone. He guided us with his daughter and sister. They held the hands of these two European tourists while they were crossing the river so that they would not fall down tripped by the slippery stones. I decided to walk ahead of them so that I could take some pictures of them. We walked slowly to safely arrive on the other side of the river. While standing in the middle of the river, I took some pictures of the Aiwatar hill. It was amazing. We were in the middle of nowhere far from the coastal region of Papua island but what I saw was a hill that was covered by coastal plants. It's weird, isn't it? Right in the middle of the hill was the drinking ground of various species of birds. 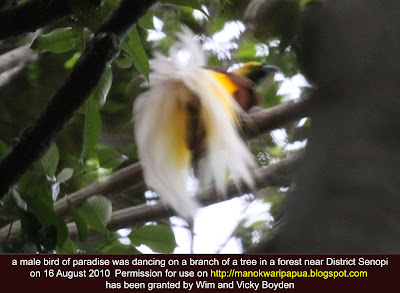 We still had to climb the hill to see the birds. Thirty minutes later we managed to climb the hill. I was tired and took a rest for awhile. While I, Vicky, and Maker's sister and daughter were taking a rest, Maker took Wim Boyden for a small tour near the edge of the hill. Wim managed to shoot some birds there. He showed them to us but we could not identify them. It took one month before I could know the names of the birds. I copied these bird photographs from Wim's laptop and sent them via email to Bert Harris. He has the Birds of New Guinea by Beehler. That afternoon although I was feeling hungry, I was eager to see as many birds as possible. We walked under the trees to avoid from being seen by the birds. And yes, we could see many of them eating fruits. Some other species were taking a rest. During our tour to the hill, we saw slender-billed cuckoo-dove, crown pigeon, pinon imperial pigeon (ducula pinon), fruit dove, and northern fantail (Rhipdura rufiventris). Actually we could see more species there if we spent one night there at the foot of the hill by the bank of Kamundan river and woke up early in the morning to climb the hill again before dawn.
We left Aiwater before 6 and arrived in Senopi village at night. The trip to Aiwatar hill was a tiring journey but it was worth visiting. I heard that a geologist engineer visited the area around Aiwatar hill a few weeks before we arrived. He did some survey for finding gold deposit. I am afraid that this natural wonders of the world will be destroyed by Papuan people themselves because of the "possible" gold deposit that lies beneath hill. 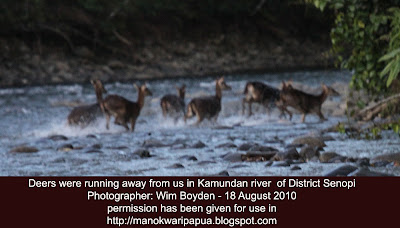 Oh, I forgot something, one the way back to the village we met a group of deers drinking water in a tributary of Kamundan. It's a fleeting moment. The sun had set in the west. We were surprised and they were too. They ran away and we were late in shooting them. by Charles Roring
Also read:
Birdwatching picture from Arfak mountains in Manokwari
Birdwatching picture Collared Kingfisher from Manokwari bay
at September 13, 2010