Palm cockatoo in the rainforest of Senopi village

During my trip to the tropical rainforest of Senopi, I, Wim Boyden and Maker had a chance to see palm cockatoo (probosciger aterrimus). This bird is also called goliath cockatoo. The bird is an endemic species in New Guinea island. Actually, we were chasing a sulphur crested cockatoo that was screaming at in the branches of a tall merbau tree. It was very difficult to see the bird because green leaves, branches and twigs covered our view. When we saw that it was impossible to see the bird, we continued our walk to find other birds. Not long after we left the place where we heard the cockatoo, we heard something above us. We looked up to the branches of a tree and there it was a black colored cockatoo with red face.
This bird was called palm cockatoo. It had just landed above our head. Its feather was black with red color on his cheek. I was amazed by this bird because it's a rare experience to see the birds in open nature at close distance. Wim took out his long lens digital camera. It was a Canon Eos a nice equipment that birders need for shooting birds.  Another alternative to watch and take pictures of birds is by using a telephoto bridge camera such as the Nikon Coolpix P900 or digiscoping devices. I had to say that it was really a fleeting moment. Wim could only take a few picture of this wonderful bird because it stayed there less then one minute. And then it flew away immediately. Tropical rainforest of West Papua is a very important ecosystem that we need to preserve. It reduces global warming by absorbing millions of metric tons of carbon dioxide that we emit every day through our daily activities. 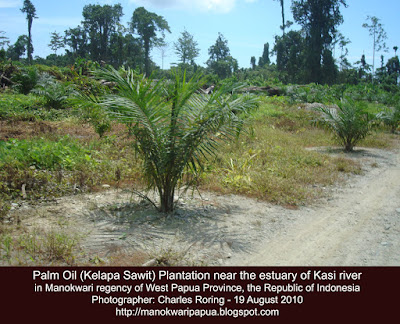 Deforestation of rainforest
On 19 August 2010, we returned to Manokwari. We passed by a place where huge areas of rainforest had been cleared to make way for for palm oil plantation. The company that runs logging businesses and sawit palm plantation is PT. Medco Papua Hijau Selaras (meaning Medco Papua Green Harmony Corporation). Around 6000 hectares of high biodiversity of the tropical rainforest are being replaced by a monoculture sawit plantation. Please, read my article entitled The Leasing of Papuan Tropical Rainforest Too Low for Compensation Too Stupid of Conversion.
The first phase of seedling planting was conducted in January 2010. I took some pictures of the palm seedlings with a sad look. The magnificent thousands of years old tropical forest has been replaced by the palm oil plantation that will only be productive for 35 years. I wonder if the beautiful palm cockatoo birds will like to eat the fruits of these sawit trees. I don't think they will. Why? Because the sawit plant (Elaeis guineensis) is not an endemic species of New Guinea island. The previous sawit plantation run by PT Perkebunan II Medan in Prafi was a big failure. Everybody in the area knows about it. Yet the officials in the Plantation Agency and Department of Forestry of Manokwari regency just do not care about it. 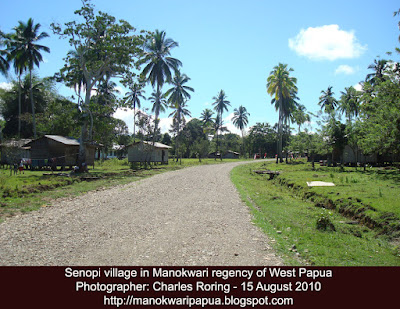 It is not only Manokwari regency that is facing deforestation, most of the rainforests throughout Papua or New Guinea island experience the same problem. We need to stop this. My ecotourism campaign is one of the alternative solutions that I offer to Papuan people. Papuan should know that their forest is a precious treasure that they need to preserve for future Papuan generation. NO FOREST NO FUTURE. by Charles Roring
Also read: