A few days ago someone from Australia asked me whether the north coast of Manokwari is good for surfing. Well, it is difficult for me to answer his question because I am not a surfer. What I know is that the waves there between October and February are usually big. Last January 2010, three Russian tourists went to Yonsoribo beach. They stayed there for two day and they took a lot of nice photographs about the area.The view of the beach, the surrounding panorama of where the tropical rainforest of Papua meets the waters of the Pacific ocean is really beautiful. 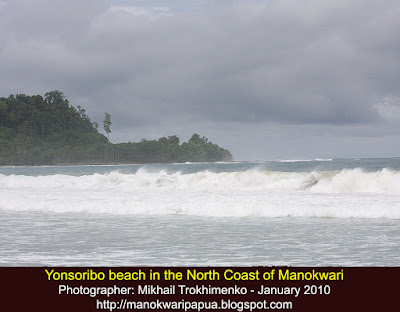 I visited the north coast of Manokwari several times. If you are a person a likes snorkeling then my recommendation will be the Nuni village. Don't forget to apply anti insect lotion on your skin to protect you from tiny stinging insects that thrive in the area. I takes around 45 minutes to reach this village. Here, you can ask the local fisherman to bring you to Kaki island where you can swim and enjoy snorkeling around coral reef that is reach of a lot of species of coral fish. You can build a camp in Kaki island and stay there for several nights. 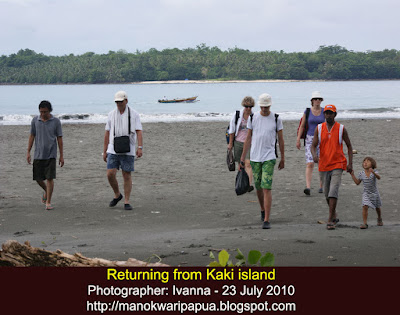 Local people will be happy to sell fish and lobster which they have just caught from the sea.
Most often, you will see big ships in the middle of the sea. These ships play an important role in supporting the economy of most of the cities and towns a long the northern coast of Papua island. They visit ports of Sorong, Manokwari, Biak, Serui, Nabire, Wasior, and Jayapura. Bird watching can be done too. Just walk from the estuaries of many small rivers along the northern coast up to the mountains. Along the way, you will see various species of birds from the ones that eat small fish to big birds such as hornbill and sulphur crested cockatoo that eat nutmegs and disperse the seeds throughout rainforest. As seed disperser, birds play an important role in the survivability of the rainforest. When you do bird watching along the north coast, you know that birds have given significant contribution to the expansion of forest and you have to appreciate them as well. by Charles Roring 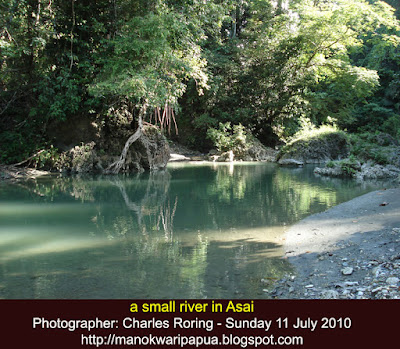