Sulphur-Crested Cockatoo from the Table Mountain of Manokwari

I, Rhett Butler - the founder of mongabay.com and Nico Nauw went to the Table Mountain of Manokwari on 2 August 2010. We did some bird watching and insect watching. Although this mountain was very closed to the city and was frequently visited by hunters, we were able to see sulphur-crested cockatoo (Cacatua Galerita), hornbills and other species of birds. Rhett brought his long lens camera so he could easily shoot the white cockatoo that was playing with his friends on the branches of a tall tree. It was still morning time when we heard the sound of cockatoo breaking the quiet atmosphere of the tropical rainforest. Carefully Rhett walked toward the source of the sound trying to find where the bird was in the canopy of the forest. 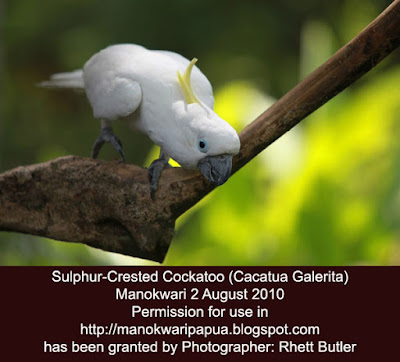 I, and Nico Nauw - my friend who was now working as field or forest guide, decided not to make much noise in order not to attract the attention of the birds above us. I was a little bit doubtful whether Rhett could get a clear photograph of the sulphur-crested cockatoo. Why? Because we were on the eastern side of the forest that morning and the cockatoo birds were shouting from trees that were also located on the east of us. He had to face the sun ray which was not good for photography. Finally, Rhett shot his camera to the birds. He didn't show the result instantly. Two or three weeks after he had returned to the USA, Rhett sent me two folders of photographs that he took from Manokwari (the Table Mountain and the Arfak Mountains).
Cockatoo birds are very sensitive to the existence of human beings at their surrounding area. Once they know that there is human down there, they will fly away. So, when you go to Manokwari for bird watching, don't be hurry to see the birds when you hear their screaming sounds in the trees. Try to walk slowly and keep hiding under the leaves and twigs of the understory vegetation. You only need to spot them and aim your camera at them and shoot.
Also read:
Watching Hornbill and Caving in the Table Mountain
Caving in the Table Mountain
Hiking and Bird Watching in the Table Mountain
at September 04, 2010