Last August 2010, I had two snorkeling trips to Raimuti island. It is a small island in the Dorey bay of Manokwari regency. The first snorkeling trip was with Wim and Vicky Boyden and the second one was with Berth Harris and Leighton Reid (two American PhD students). I personally started offering snorkeling tour package to Raimuti island with the intention of raising awarness among the coastal and fishermen communities living along the Arfai beach about the importance of coral reef to them. I also provide guiding service for tourists who want to enjoy snorkeling around Mansinam island. 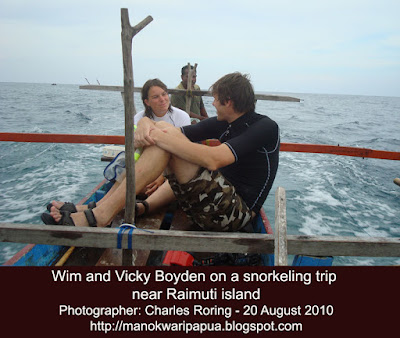 When I was in Raimuti for the first time, I was amazed by the beauty of the corals there although some small part of them had been damage by fishing activities. Coral reef is an integral part of marine ecosystem which we need to protect and preserve for our future.
I always use the service of the local fisherman, Mr. Kosal Welerubun, who lives at the Arfai beach for providing boat ride to and from the Raimuti island for foreign tourists.  According to Mr. Welerubun, I am the only tourist guide who frequently bring tourists for snorkeling around the coral reef there and bird watching in the island. 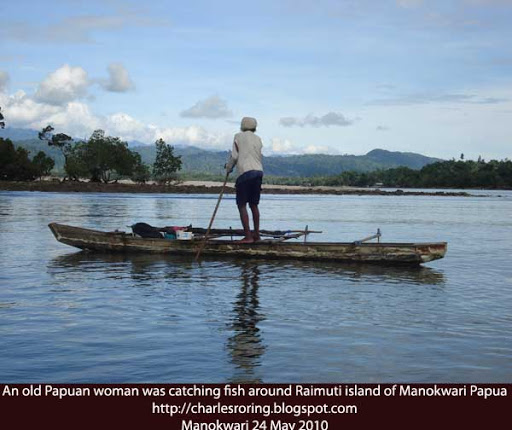 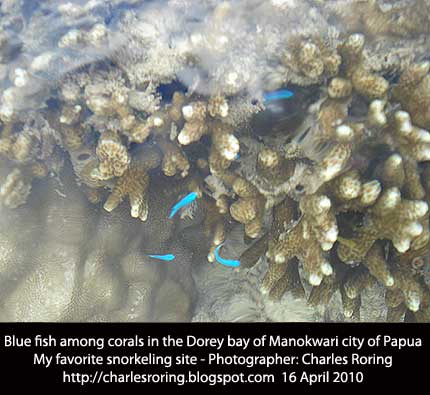 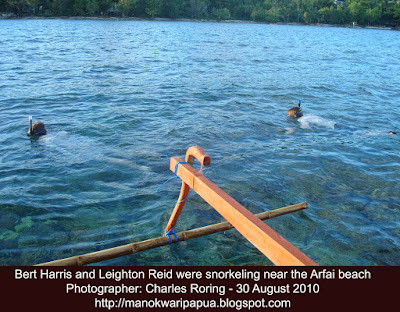 Eco-tourism scheme that I have been developing for the last eight months in Raimuti gradually attracts the attention of the local town dwellers of Manokwari who live along the Arfai beach. Every time tourists come to the area, they will come out to see what we do there. Returning from snorkeling, I always provide time to have some discussions with them and raise the importance of protecting the coastal area of Arfai by not throwing plastic bottles and domestic wastes to the sea. 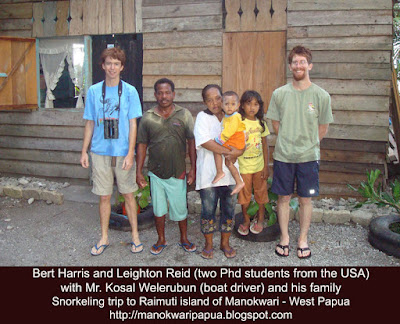 I have to express my concern in this blog post about physical development that is now going on the Arfai Hill. In the near future, government offices will be built up there and will directly be crowded with people. Then more people will come and build houses on Arfai hill. More garbage will be created and during the rainy days, plastic bottles and domestic wastes will flow to the sea. The sea will look dirty. Plastic cups, bottles and tote bags blockade the sunlight from supporting the single-celled organisms called zooxanthellae to photosynthesize.
I expect that eco-tourism project in the form of snorkeling and bird watching tour package in the surrounding coral reef area of Raimuti island will remind the local government that the area has to be strictly protected and preserved. by Charles Roring contact email: peace4wp@gmail.com
Also read:
Snorkeling at the beach of Mansinam island
at September 01, 2010