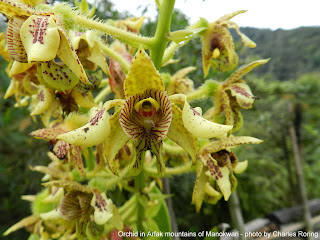 Tropical rainforests in the mountains and islands across West Papua are now becoming the attention of biologists from around the world due to their essential functions in absorbing CO2 gases and  their natural wealth of biodiversity. The rainforest of New Guinea in the coastal and mountainous regions is rich a lot of species of flowers. Many of them are orchids. They grow on the branches of big trees twenty or thirty meters above the grounds. Due to the high demand of these tropical orchid flowers in the local and national markets, the indigenous people have collected large number of orchids and sell them in cities and towns of West Papua. These orchids plants will then be shipped to big cities in Java and sold in high prices. Because hunting orchids that naturally grow in the tropical rainforest will affect the balance of the rainforest ecosystem, there are efforts from the local Papuan themselves to cultivate these plants at their homes. By planting and growing orchids and other rainforest flowers, they can get increase the number of plants which they are able to sell.
Although orchid farming is still considered as a small home business activity. Many people still do it in front of their home yards. There are not any companies in West Papua that have opened large areas of farmland to be used for cultivating orchid flowers.
A few months ago, there was an Orchid exhibition in Manokwari city organized by the government to promote orchid as a non-timber forest or agricultural products. Papua and West Papua provinces have a number of dendrobium orchid species that are expensive in such big cities as Jakarta, Surabaya and Denpasar. The local government want to promote the region as the major supplier of this tropical flower to improve the living condition of the flower farmer.
If you go hiking in the tropical rainforest of Arfak mountains, Table Mountain and the North Coast of Manokwari regency, you will be able to see various species of orchid plants in the jungle. Papuan people do not see orchid only as decorative plants. They use orchid fiber to make noken (string bags). The pseudo bulbs of orchid is also used by the islanders in Numfor island as herbal remedy for abscess. The pseudo bulbs contain sticky thick liquid than can be applied on the surface of one's skin that is suffering from abscess. The liquid will suck the pus and dry the wound without causing severe pain.
So, next time when you see an orchid plant with its beautiful flowers, you will know that it is also a good herbal medicine. From the above story, we can conclude that the preservation of the tropical rainforest is not only important for fighting global warming through the absorption of CO2 gases but also for protecting the high biodiversity that it has for the improvement of the standard living condition of mankind. From the rainforest, we can get a lot of species of plants that have medicinal functions. Rainforests and global warming are two important issues that cannot be separated but the preservation of these rich environments is not limited to them. Simply, it is very important for all of us.
On a separate trip into the rainforest of West Papua, I accompanied a young Biologist from the United Kingdom. Her name is Georgie. We went hiking through the jungle of Manokwari town. Our destination was the tropical rainforest of Dopi river on the west of the town. We saw fruit doves, pygmy parrots, Blyth's hornbills, butterflies, and various colours of terrestrial orchids. Perhaps, the one in the above photograph is Spathoglottis plicata. If you are looking for more information about orchids, try to buy some books at Amazon online store
Also read:
Rainforest Flowers Used as Medicinal Herbs
at December 17, 2010