Tropical rainforest of Arfak mountains in West Papua is facing deforestation rapidly at the moment. This problem has been the focus of attention of a lot of people who love Papua's nature very much. For instance, much of the rainforest area in the flat region of Prafi valley of Manokwari regency has been converted into agricultural area where farmers grow rice, and plantation companies operate CPO plant there. To produce crude palm oil (CPO), thousands of hectares of rainforest biome have to be cleared for monoculture sawit plantations.
The rainforest of Prafi whose biodiversity was very high has now gone forever. 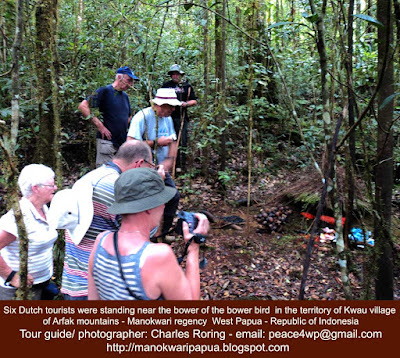 To prevent the continuous destruction of rainforest, an alternative way of income generation should be developed. As a matter of fact, there are many solutions for that. First, the indigenous people can harvest non-timber products such as herbs, orchids and other tropical flowers, as well as rattan and meat from their forests to be sold in the local market. Another interesting scheme which is very effective in improving the economic condition of the indigenous Papuan people living in and around the forest is through the development of ecotourism project. 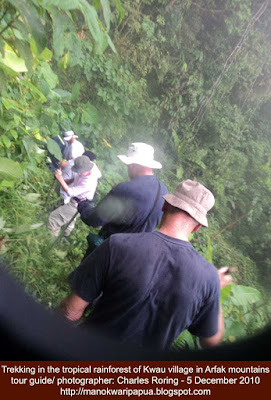 Three days ago, I brought 7 tourists from the Netherlands to Arfak mountains. We visited Kwau village. These Dutch tourists, in their old age, went hiking or trekking inside the jungle to watch magnificent birds of paradise, spotted cat bird and bower bird.
To help them locate where these birds are, Hans Mandacan, the owner of Kwau tourist guest house, built several huts. These bird watching huts would be used by the tourists to see birds from very close distance in the morning and in the afternoon. Because every hut could only be occupied with a maximum of four tourists, we had to divide the group into two smaller groups. They would shift huts in the mornings and in the afternoons. Since bird watching activities need patience, tourists were told not to have loud conversations while staying in the huts.
The Dutch tourists did 3 bird watching trips from the 4th to 6st of December 2010. During those trips, they could watch magnificent birds of paradise (male and female), spotted cat birds (also male and female), and vogelkop bower bird (perhaps the male one). Because they were late when entering the hut for watching the bower bird, they could only saw him in less than one minute.
In addition to watching birds, these Dutch tourists also saw how Hans Mandacan made the extract of red fruit oil (Pandanus Conoideus Lam). The indigenous Papuan who live in and around the rainforest of Arfak mountains have used the extract of the red fruit in their diet for thousands of years. Physically they have strong bodies and are not easily to be attacked by any tropical diseases. Recent reports from researchers in Cendrawasih University have shown that the extract of red fruit oil can effectively be used for the treatment of patients with tumors in the brain, breast, womb, and even the treatment of patients who are infected with HIV/ AIDS virus.
The short description about the preservation of tropical rainforest through the development of ecotourism with emphasis on bird watching, insect watching, herbal medicine study and butterfly farming can bring positive economic benefits to the indigenous Papuan people of the Arfak mountains.
I expect that the central, provincial and local governments will pay attention to this and  help the Papuan develop their ecotourism projects in Arfak mountains through the improvement of infrastructure, the guesthouse and various other programs that can make the indigenous people of Papua more prosperous without jeopardising their precious rainforest environment. by Charles Roring
Also read:
Tropical rainforest flowers
Tropical rainforest preservation in District Senopi
Tropical rainforest of Numfor island
at December 07, 2010