The mountain range of Arfak is a great hiking destination. There are a lot of trails which hikers can choose to hike through the tropical rainforest. The terrains consist of steep slopes with some valleys particularly in the Mokwam region. More moderate hiking trails are located on the south east of the mountains from District Oransbari to District Ransiki. Hiking tours in Arfak can be arranged to cater the needs of visitors depending on their physical condition and duration of their visit in Manokwari.
From 4 to 6 December 2010 I guided 7 Dutch and 1 Indonesian tourists to the tropical rainforest of Kwau village in Arfak mountains of Manokwari regency. Six of the Dutch were elderly people whose ages are between sixty to seventy years old. I had not known this until I met them on the 1 of December 2010. Well, I had planned a tour in the jungle whose terrain was more suitable for young age people. I felt a little bit guilty about it. I was not able to cancel the trip to Kwau village because Hans Mandacan already informed the villagers about our planned visitation. 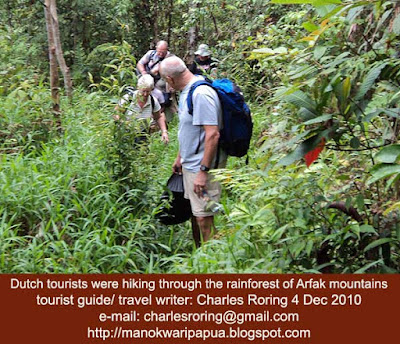 So, on the 4 of December 2010, two 4WD cars - Toyota Hilux left Manokwari for Arfak mountains. These cars were very powerful in climbing the steep slopes of the Arfak mountains. In addition, the drivers whom I chose were the experienced ones. Along the way I was praying that these people would be able to walk through the rainforest, overcoming hills in front of them and finally arrive at Hans Mandacan's house. His house is not a luxurious rain forest resort equipped with complete facilities and fireplace cabins. It is only a simple 4-bed room house which Hans built by himself at a hill near Kwau village. 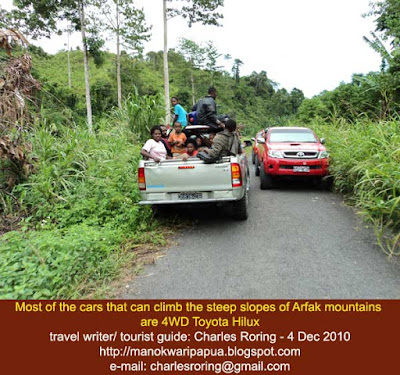 At around 13 p.m. we arrived on the road near a pathway leading to Hans' house. Around twenty villagers from Kwau village were waiting for us. They were women, men, boys and girls. They would carry our bags to Hans' house which he had changed into a temporary tourist house. We handed over our things to them and up we walked into the woods. Everything seemed to run well in the first ten minutes of the jungle walk. After that they began to ask whether the house was still far from our sight or not. We could only say that we were getting closer to the tourist house. 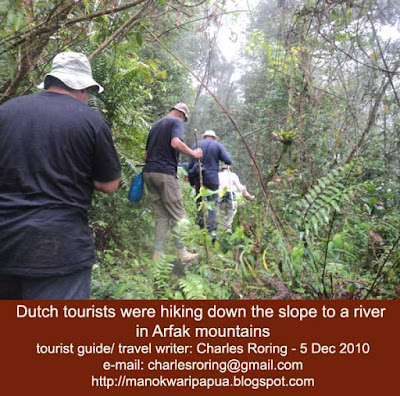 Birds were singing in the brances of the tropical trees. Perhaps they were enjoying the nectar of wild flowers or eating various forest fruits. December was time for fruiting season in West Papua. Birds and other rainforest animals were having parties with the abundant food that they had that month. Particularly for the magnificent birds of paradise, they like to eat red fruits. These old people were getting tired after ten minutes walking up several slopes of the Kwau village territory. It took one hour for the whole tourists to arrive in the tourist house. Besides it was far from the main road, the tourists often stopped for a while to take a rest or to see rainforest flowers, mushroom or anything that looked interesting in the jungle. When they arrived in the house, one of them complained to Sjaak (the coordinator of the tour) that the trekking route that day was too heavy for her. 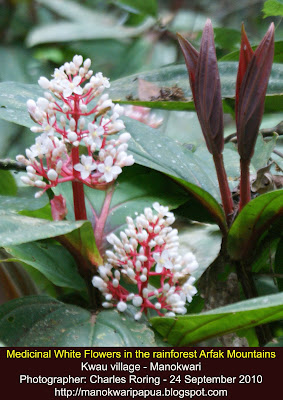 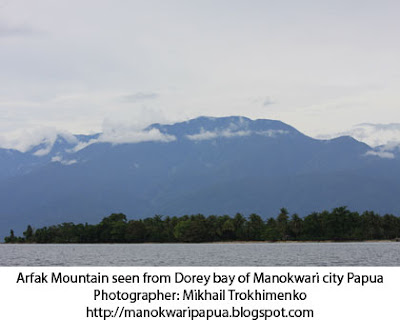 So, if you plan to visit Arfak mountains, prepare yourself for a long rainforest hiking that will consume much of your energy in the slopes of the tropical rainforest. It is better to practice walking for at least three months before you go to West Papua. The duration of your walking practice can be 30 to 60 minutes. You will feel exhausted by that. Arfak mountains are rich of mammals, birds, reptiles and insect but they pose big challenges to those who want to explore their natural beauty.  by Charles Roring
Also read: Go Hiking in the Table Mountain
at December 21, 2010

Charles,
I love your stories. I am very familiar with the Manok area. I worked as the administrator for the Konijnenberg Shipyard during the period 1961/63, after spending about one year in Sorong. I would love to visit Manokwari and Papua Barat again, however at the age of 72 and after 2 heart operations I am afraid to make the trip. I am living in the USA since 1969 and it is a long flight. But you never know, my heart has been pounding every time I read about Manokwari. Keep up the good work. You will contribute to an increase in Tourism.
Thanks, John Jordan