As a tourist guide and travel writer, I like to go hiking and guiding tourists around the tropical rainforest of New Guinea island. This island is also called Papua or West Papua. Today, Papua as the largest tropical island in the world is administered by two countries. The eastern half is the independent state of Papua New Guinea whereas the western half is the territory of the Republic of Indonesia that consists of two provinces Papua and West Papua. The capital of West Papua is Manokwari city. I discuss a lot of topics about tropical rainforest that covers the mountains and plains around the city. 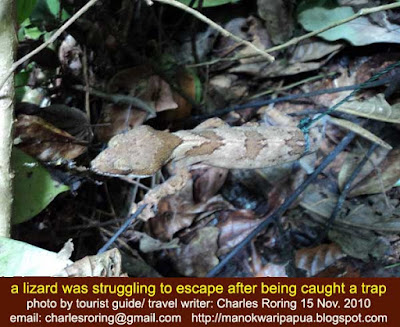 While guiding tourists, I like to take pictures of animals, flowers, mushrooms, birds, insects, trees, unique leaves of the vegetation and the tourists whom I guide. Today, I am going to tell you a little story about lizard. There are many species of lizards in the tropical rainforest of Papua. As reptiles, small lizards usually eat insects. They can climb trees fast. Some lizards have skin surface that are adapted to the play where they live. If a lizard attaches itself on a tree trunk whose color is green brown, its skin color will adapt to the color of the host tree. This is one of the ways which some lizards do to protect themselves from being the prey of their predators. 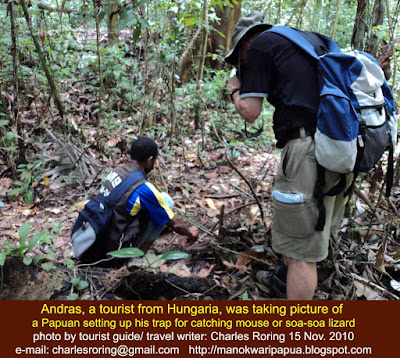 The tropical island of Papua has big lizards which the indigenous people like hunt and eat their meat. These big lizards are called Soa-Soa. Soa-soa do not eat insects. Instead they eat the meat of dead animals such as small forest mouse, other small reptiles and dead birds. In the tropical rainforest food chain, soa-soa lizards are the prey of big birds such as hawk or eagle. 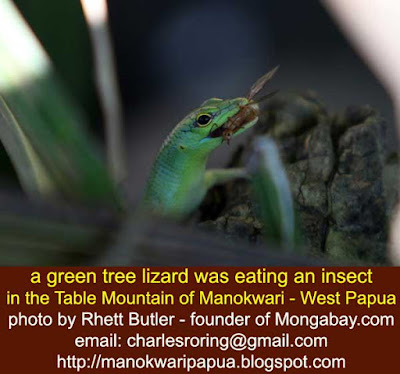 The photograph above shows how a green tree lizard catches an insect in a tree in the tropical rainforest of the Table Mountain. Sometimes small butterflies that eat nectar for rainforest flowers become the target of the lizards. This is the usual food chain that always happen in the jungle. We cannot stop them because it naturally occurs every day.
The indigenous Papuan people have a unique technique in catching soa-soa. They don't use modern air guns instead, they use lasso trap which they set on the ground. Usually they make a least 20 traps placed in one row and cut small vegetation to make a small fence between the traps. The distance between two traps is around five to ten meters. When the lizard walk on the ground and face the fence, they will change their direction to find a clear ground the pass through. Then they will as a clear ground, where the hunter of lizards has set up his trap. If the lizard pass through the trap, it will step on the pin that triggers the wooden stick of the trap to pull the lasso made of a smooth nylon string. As a result, the lizard's head, or leg or even main body will be caught by the lasso. 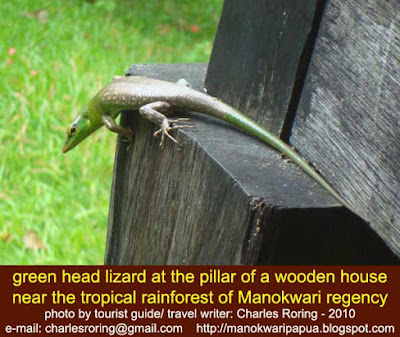 The next morning when the hunter comes to check his traps, he will find the lizard which is a good meat for his family. So, if you are interested in hiking in the tropical rainforest of Arfak mountains, Table Mountain and the Nort Coast of West Papua to see lizards or other animals, you can contact me - Charles Roring - via my e-mail charlesroring@gmail.com. I will be happy to be your guide in this beautiful tropical island.
Also read: Birds from the Tropical Rainforest of Manokwari Papua
at December 11, 2010