Tree Snake in the Tropical Rainforest of Manokwari West Papua

by Charles Roring
I went to Pantura region of Manokwari regency this afternoon. Pantura is a short name in the Indonesian language for the Northern Coast. I hiked along the banks of Asai river as part of my survey on the possibility of developing the area as an alternative for ecotourism destination. That afternoon, I was able to take a lot of pictures of insects, flowers and green vegetation that thrive healthily along the banks. 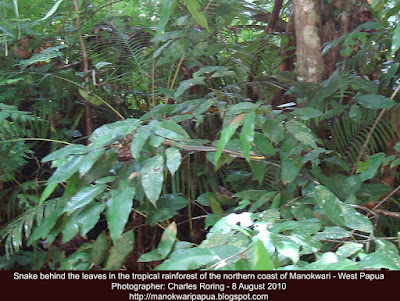 At around 1 p.m. when I had been in the banks of the Asai river for around 3 hours, I saw a snake moving in the branches of a tree. Its length was approximately 1 meter. Its skin is yellow and blue. When I moved my digital camera closer to it, it also came closer to me. I was a little bit nervous because I did not know whether it was a venomous reptile or not. 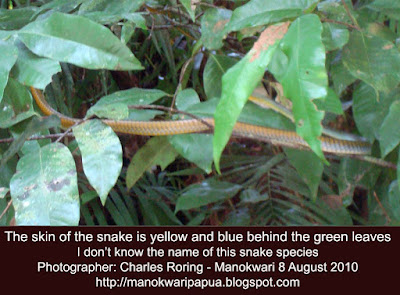 The color of the eyes of the snake was blue when they reflected the flashlight of my camera. I don't put all the photographs that I shot for the snake because some of them are blurry. Perhaps, my hands were shaking when I shot my digital camera Sony Cybershot DSC W-80 because I was a little bit nervous. I hope that I can bring a long lens camera in my future adventure in the forest so that I can provide better looking photographs of reptiles, insects and plants from the tropical rainforest of Manokwari of West Papua for you. 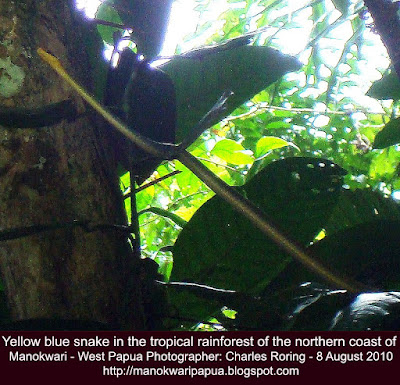