Night Walk in the Tropical Rainforest of the Table Mountain

by Charles Roring
I and Rhett Butler - the founder of mongabay.com had decided to do night walk in the Table Mountain of Manokwari before he left this town for Jakarta the next morning. Accompanied by Nico Nauw, we hiked into the tropical rainforest of the Table Mountain again to see hornbills and insects. During the afternoon walk, Rhett managed to take some pictures of Sulphur-crested Cockatoo (Cacatua galerita- Latin). I was not a birder so I could not mention the English or latin names of all the birds in this forest. The tropical rainforest of the Table Mountain was a protected forest owned by the local government of Manokwari regency. We started climbing the forest at 4.30 p.m. on the 1 of August 2010.
Tropical rainforest in this mountain has been categorized by Indonesian department of forestry as Taman Wisata Alam (TWA) meaning literally the Natural Tourism Park. We walked into the woods where Rhett photographed hornbills eating fruits of ficus tree, ficus benjamina (pohon beringin). When we arrived under the tree, the birds had finished eating and silently rested on the branches of the tree. Hearing the cracking sounds of the breaking dry twigs on the ground that we stepped on, the hornbill birds flew in a rush to another benjamin fig tree some 200 hundred meters away from us. We decided not to chase them and began concentrating on taking pictures of insects along the paved road that passed through the rainforest. 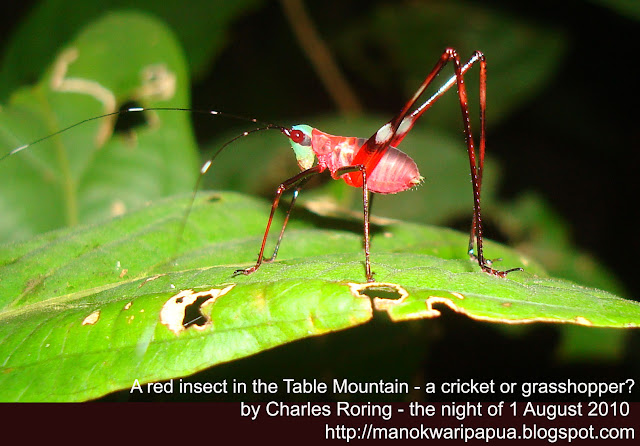 When the sun had set in the west, and when the canopy of the forest left abandoned in the dark,  with the help of two LED flashlights, we could see various colorful insects on the leaves of green vegetation on both sides of the road. I did not know whether they were nocturnal insects or not. But they had wonderful colors. There were grasshopper, crickets, and flies. I also saw lizards, snails and frogs. With my Sony cybershot pocket camera, I tried to take pictures of some insects that look red.  I was not really sure whether the insects which are presented in this blog post were grasshopper or cricket. 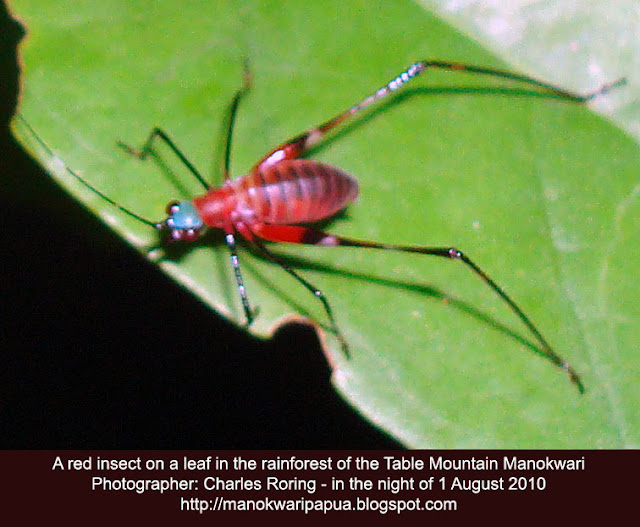 It was a fascinating experience walking in the dark forest and taking photographs of various tiny creatures that part of rainforest ecosystem. I was sad to see that this green forest of the Table Mountain of Manokwari has now been used as dumping ground for city wastes and garbage. I hope that the city dwellers of Manokwari would stop dumping their domestic and store garbage into this wonderful forest. 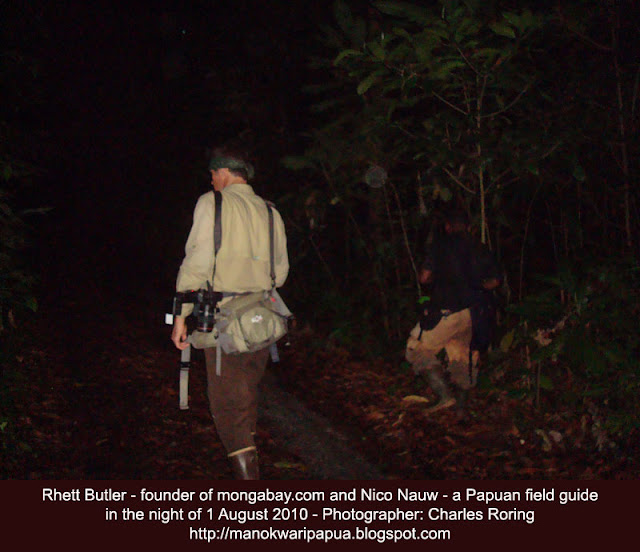 Tropical rainforest in the Table Mountain of Manokwari city plays an important role in absorbing the CO2 gases emitted by the city dwellers as well as storing large amount of water that is consumed the citizens every day. The existence of the forest also cools down the temperature of the surrounding area near the forest. With my current focus is now promoting eco-tourism for helping the local Papuans get more benefits from their natural environment without destroying it, the rainforest near this city will always within the range of my everyday attention.
Also read: