Bird lovers might not know the existence of a place called Aiwatar. It is located some 4 hours walk from Senopi village in the Tambrauw Mountains of Manokwari regency. Manokwari is also the name of a city which is the capital of West Papua province. I, Wim and Vicky Boyden went to Aiwatar on 18 August 2010. We began walking in the morning at around 7 and arrived there at around 11.30 a.m. Wim and Vicky Boyden brought their EOS long lens Canon digital camera to shoot the birds that were singing in the branches of the trees along our walk to the Aiwatar - the Bird Center. 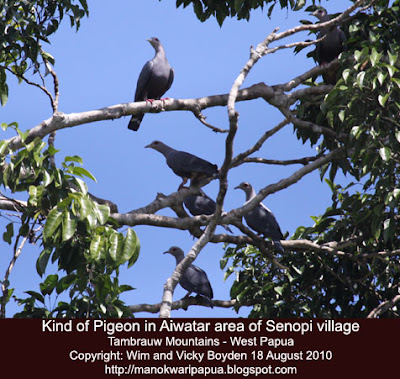 For bird watching, birders have abundant birds to shoot with their long lens camera while hiking around the tropical rainforest of Senopi village. But it is nothing compared to a place called Aiwatar. So, although we had been very tired, we were very determined to reach the area. We were informed by the villagers that there are a lot of birds with a large variety of colors and species. Walking in the tropical rainforest of District Senopi was a hard work but was also a fascinating experience.
The sounds of ornate lorikeet, cockatoo and hornbill and various other birds fill the atmosphere of that clear morning sky combined with the sound of the flow of water from the tributaries of Kamundan river. The feather of lorries that we saw in the trees near the Senopi village looked like rainbow. I liked hearing the music of the nature during that morning walk. 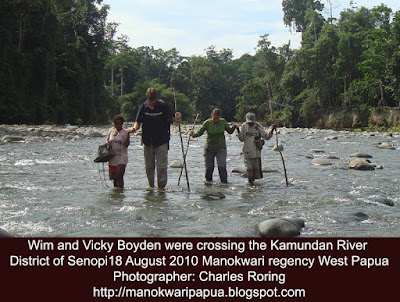 We had to cross the Kamundan river to reach the Aiwatar. When we were about to enter the river, from a distance around three hundred meters from us, we saw a dog barking on big deer that was trying to cross the river. According to our local Papuan field guide, the dog belonged to a hunter but he was not sure whether the hunter was with the dog or not. Wim took his long lens camera trying to take the picture of the barking dog and the nervous deer which were too far from us. The result was a blurry picture.
We still had some two hours walking before we arrived in Aiwatar - the place which the villagers  in the District of Senopi call "Pusat Burung" or the bird center. According to Maker - our local birdman, very few tourists have visited Aiwatar. Even though I was very tired at the time, when I saw birds flying around the trees, I suddenly felt relieved. Arriving at the foot of Aiwatar hill located on the other bank of Kamundan river, I soaked my whole body in the flowing water. It was very refreshing. Our lunch of that day was cassava which was cooked inside bamboos. Our drink was unboiled, but clear and fresh water taken from the river. I don't know the names of the birds that were shot by Wim Boyden through his long lens camera but there are various other birds which we did not shoot. I also brought a Sony Super SteadyShot DSC-W80 digital camera but it was not equipped with long lens. Below is a photograph of Aiwatar which I took while standing in the middle of the Kamundan river (one of the largest rivers in the Bird's head or Vogelkop region of West Papua). 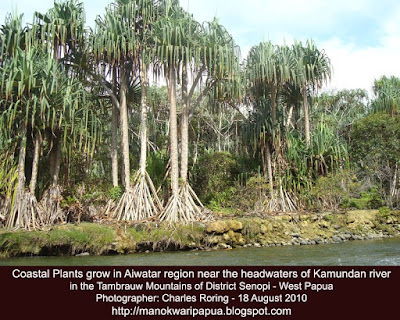 Well, what is bird center? It is a place in the remote mountainous region of Tambraw mountains inside the territory of District Senopi. Here, salty warm water comes out of the ground in several places around a hill called Aiwatar. Another amazing thing is that although Aiwatar is located very very far from the beach, most of the plants that grow in the area are the same as the plants that usually grow along the coastal region. The ground surface is covered with sharp corals that is normally seen in the coastal area. Every morning thousands of birds come to this place to drink the water until they get drunk. 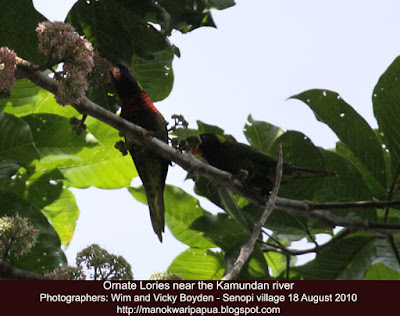 I am not a birder but when I was in Aiwatar I became a bird lover. I hope that one day I could buy a long lens camera to shoot a lot of beautiful photographs of birds that live in the tropical rainforest of West Papua, both along the coastal and mountainous regions. by Charles Roring - If after reading this post and you are interested in visiting West Papua province of Indonesia and want me as your guide, please contact me via this email: peace4wp@gmail.com or by whatsapp to: +6281332245180.
at August 21, 2010