Snorkeling around the Mansinam island with the Labree family 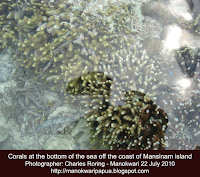 Last July, I went to Mansinam island with the Labrees. They are Mr. (Jan Willem) and Mrs. (Ellen) Labree, Florien, Jasper and Margot Labree. As part of a one week intensive tour program around Manokwari and Wasior, the visit to Mansinam island would be for them to enjoy snorkeling around the beautiful coral reef in the south of the island. Mansinam has an extensive coral reef park along its southern beach. Various species of marine animals live among these corals making them as the source of food for the islanders and citizens of Manokwari.

Despite its vital function as the source of food and the barrier for stopping big waves from hitting the coastal area of Manokwari city, coral reef of Mansinam island is always receiving wastes from Manokwari city. and the ships that pass by it every day. The citizens of Manokwari continue to dump their domestic and market wastes to the sea. Water current that regularly enters the Dorey bay, brings huge number of plastic wastes to the Mansinam, Lemon and Raimuti islands. 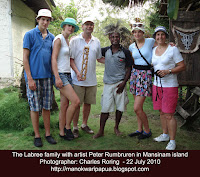 I asked Peter Rumbruren to bring the Labree Family around the island and stop at the place where there was white sandy beach with colorful reef decorating the bottom of the sea near it. For the Labree family, snorkeling in Mansinam island was a very memorable experience. They could see urchins, blue fish, anemone, parrotfish, surgeonfish, and giant clamp at the depht of around  3-5 meters below the sea level. I asked Peter Rumbruren and his friend to move the boat over the corals where the Labree were snorkeling around. 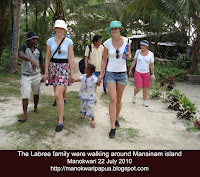 After snorkeling at the south of  the Mansinam island, we still continued snorkeling above  a sunken ship near a place called "air salobar" and then landed on the beach to walk around the Mansinam village to see how the Papuans live in their daily life.
The final leg of the tour was a visit to Lemon island. Here we met Om Jordan, an old man who climbed a tall tree to install a Dutch flag there as a symbol of his support to the orange team during the World Cup final. I still have some more stories of The Labrees' visit in Manokwari which I will try to write in my next posts.
Also read: Snorkeling at the beach of Mansinam island
at August 08, 2010