Frogs are amphibious animals. Amphibious means that the frogs can live on dry land and in the water. On the evening of 30 July 2010, I accompanied Rhett Butler, the founder of mongabay.com, to a small river near Syiobri village. During the days, local Papuan villagers wash their clothes and take a bath. Drinking water is also taken from this river. Syiobri is a small village located on a slope of Arfak Mountains. Our local field guide, Elyakim, showed us the foot path leading to the river where we would be photographing frogs and insects and any animals that we saw that night. 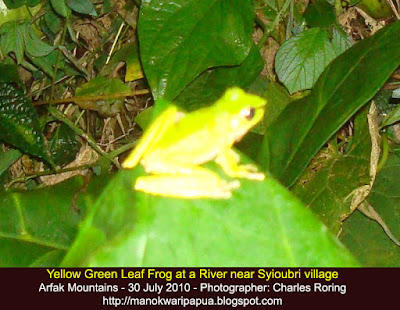 We went out at around 8 a.m. after taking our dinner. I brought two LED lamps with me to lit the foot path. According to Zeth Wonggor, the owner of the tourist basecamp, frogs usually come out at eight. Because the river was not far from the base camp, we could easily reach it within only ten minutes walking.  Frogs were already singing krog..., krog..., krog... when we stepped on the stones of the river bank. With the LED lamps, we could easily spot frogs that were sitting on leaves and twigs and on the slippery granite stones of the river.  Those frogs were waiting for their prey which were insects. 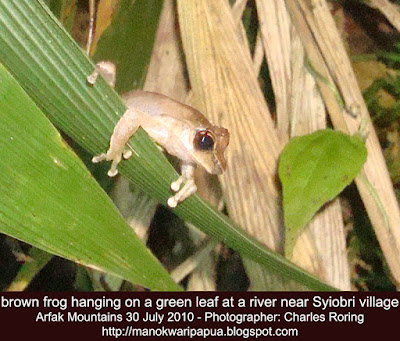 The frogs that were on the plants had yellow green and brown colors whereas those that were living along the wet gravels and stones of the river had dark brown to black colors. It was very easy to take photographs of leaf frogs but it was difficult to take pictures of the ground or water frogs. They were not tolerant enough to lamps and our careful efforts to approach them with our camera. Hearing our approaching steps, the water frogs hurriedly jumped into the water thinking that we were lethal or hungry predators. Actually we only wanted to take some pictures of them from closer look and from various different angles of camera shootings.
It was my first night staying in the Arfak Mountains just a stone throw away from the tropical rainforest. I had to admit that I was not used to its cold temperature. We were continuously moving up the stream to find more frogs, I didn't feel cold at all but later when we had returned to our tourist basecamp and slept for a few hours, I felt that it's very cold there especially after 3 a.m.
I was satisfied with the night walk because I could shoot some nice pictures of these wonderful amphibious creatures of the Arfak Mountains.
at August 26, 2010