Mountain biking along the road leading to Cape Bakaro of Manokwari city in the morning is really fascinating. Besides having the chance to inhale fresh air, I could see people preparing for morning Church service. Manokwari and the whole territory of West Papua used to be under the Dutch administration. So, it is not surprising to see some Dutch influence in this tropical island. When I was in Pasirido and Abasi areas, I took some pictures of a Dutch flag and a Protestant church named Utrecht Sau Abas. Utrecht is definitely a Dutch name. It is a city in Europe. Since it was Sunday morning 30 January 2011, I saw some people at the church. 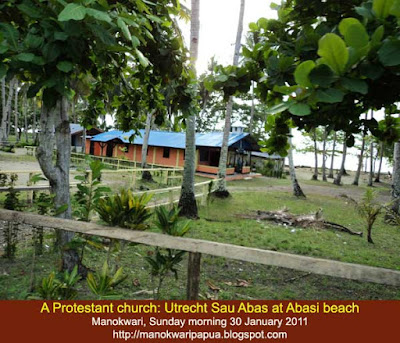 Most Papuan in Manokwari were preparing to go to church that's why the road from my house to Cape Bakaro was relatively quiet. There were not many motorized vehicles moving around the bike riding was really excellent. 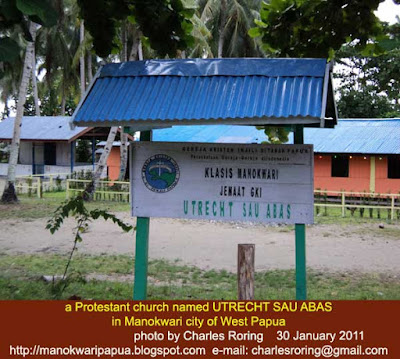 The Dutch flag that you see below has been on the top of the tree since the world cup event in South Africa last year. Although the world cup was over and the Dutch could only get the runner up position, the Papuan still do not want to take the flag down the tree. This flag clearly shows strong emotional connection between the Papuan people and the Dutch or the Netherlands. 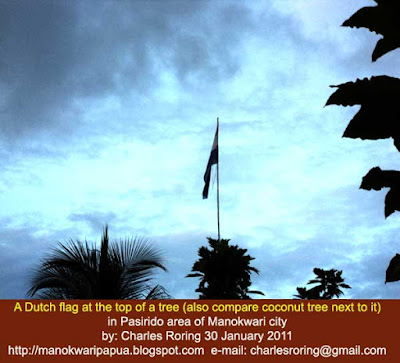 The road from Missi to Cape Bakaro is quite far. It takes around a little more than one hour cycling to reach the cape. Although it is a long ride, the scenery of the coastal area of Manokwari in the morning is really beautiful. Cyclists will never get bored when riding their bicycles along this route. I have been cycling through this route many times but I never feel bored. The tropical rainforest, the white sandy beach, the coconut trees, the flowers, the villagers, and the scenes of children playing or swimming always attract my attention. 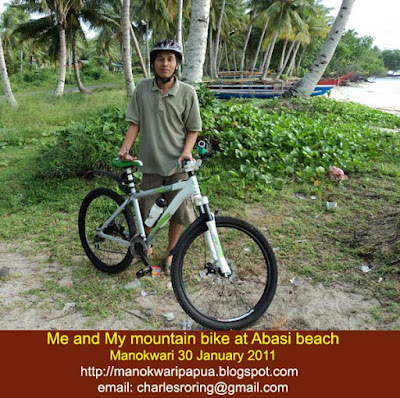 If you plan to visit Manokwari and are interested to see its beauty by mountain biking or cycling, I will be happy to guide you around - with bicycle, of course. It is my personal commitment to promote ecotourism that preserves the tropical rainforest and coral reef around this city and it is also my passion to re-introduce cycling culture to the city dwellers. I believe that by regularly cycling around, I have directly promoted this environmentally friendly lifestyle to the Papuan people. I am happy to see that more people are now riding bicycles in this town. The more we cycle the better our city will be - the cleaner the air and the healthier we will be. 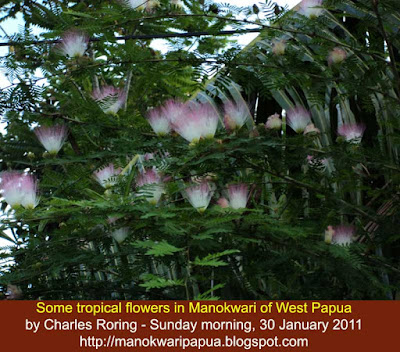 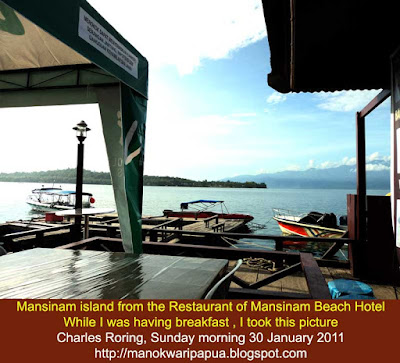 One week from now, there will be a great celebration in Manokwari. The Christians will celebrate the Gospel Landing (or Preaching) Day in Papua land. On 5 February 1855 two European evangelists landed on Mansinam island to preach the Good News to the Papuan people. That's the beginning time where Papuan civilization entered its new chapter. Now majority of the Papuan are Christians. Thousands of people will gather in Manokwari city to celebrate the Gospel Preaching day with various activities from art exhibition to street parades.Tourists will come to this city too to see the wonderful celebration. So, if you have time, don't forget to visit Manokwari now! by Charles Roring
at January 30, 2011