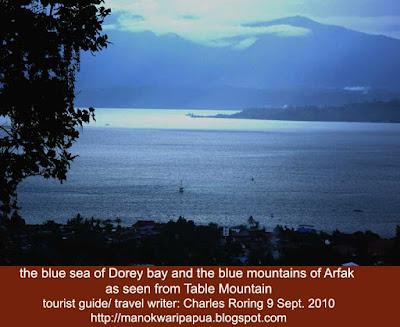 Last Christmas I guided an Indonesian tourist cycling around the tropical rainforest of the Table Mountain. His name is Danang and he was very fond of cycling. So, in the afternoon I offered him a cycling tour with my mountain bikes. I gave him the dirt jump mountain bike polygon dx 2.0 whereas I rode the Polygon Celine 3.0. We began cycling from my house along the Brawijaya Street and slowly ascending the Sarinah area. From the Sarinah, the slope was getting steeper and steeper. the dark green color of the tropical rainforest of the Table Mountain was in front of our eyes. It was only around 200 meters ahead of us but it was difficult to be reached. 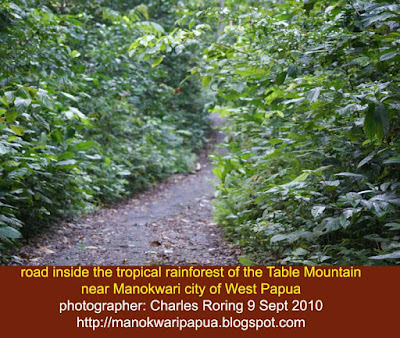 I shifted my front gear to 1 and gradually moving the rear gear to 1 too from speed 9. I felt that paddling up the slope is difficult but I managed to get to the top where I could see the gate of the Table Mountain on my left. Danang seemed to be exhausted in the middle of the road. He got off the bike and started to walk up the slope pushing the mountain bike on his right side. Finally, he was able to reach the top.
After taking a rest for around 15 minutes watching the blue sea of the Dorey bay below us and some part of the Arfak mountains at the other side of the bay I decided to carry on our mountain biking tour that afternoon. We did not enter the forest because the road condition at the slope near the gate was not good enough. We passed through the Ayambori village, the Litbang area, the black house, and then the Kebun Percobaan. 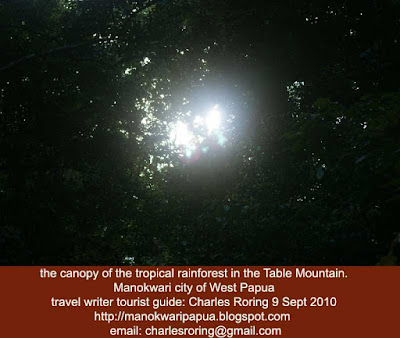 Several hundred meters before the entering the Anggori village, the chain of Danang's bike went off the gear when he tried to shift the front speed from 3 to 1. We stopped to repair it. The chain stucked between the gear and the dirt jump bike frame which was made of aluminum compound called Alx 6061 manufactured by Polygon - a wellknown bike maker in Indonesia. Fortunately there was someone on the other side of the street who was repairing his grass cutting machine. I borrowed his screwdriver and plier to hammer the chain out to the narrow gap. I saw that the friction between the chain and the frame left some deep scratches on my mountain bike that had just arrived 3 weeks before Christmas 2010. While repairing the chain, we were able to hear the sound of waves landing on the beach of Amban beyond the tropical rainforest of the North Coast area of Manokwari. We arrived at home at around 7 p.m.. Although we experienced small incident that afternoon, I could say that I really enjoy the cycling trip on the second day of clear afternoon Christmas.
Private Guided Tour
As a tour guide, I provide a private guided cycling or hiking tour services to you if you are interested in exploring the mountains, the tropical rainforest and the coastal area of Manokwari. I can also escort you on a hiking and snorkeling trip to Numfor island - a small and peaceful tropical island in Cendrawasih bay. Please, contact me via e-mail: peace4wp@gmail.com for further arrangement of your trip.
Also read:
Mountain Biking in the Table Mountain
Riding bicycle is good for our health and environment
at January 04, 2011