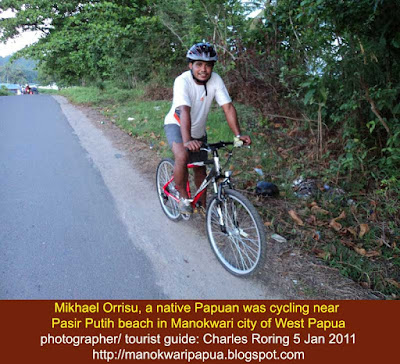 Last Christmas, I gave a mountain bike tour to an Indonesian tourist. His name was Danang. He worked for Datascript an IT company in Indonesia whose headquarter is in Jakarta. He rode my dirt jump mountain bike Polygon Cozmic DX 2.0. which had just arrived on 6 December 2010. Danang rode his bicycle every Fridays to his office so it was not difficult for him to adjust the seemingly complicated Shimano Alivio gears of my newly arrived mountain bicycle. The first touring route was to Pasir Putih beach. It was on 25 December 2010 and the second one was touring around the Table Mountain which is still covered with tropical rainforest. 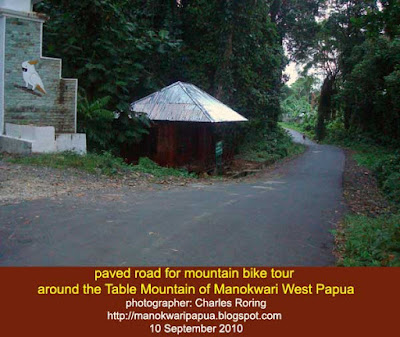 As a matter of fact it was my first time providing a cycling tour to a "tourist." Most of the tourists who visited Manokwari rent a car for traveling around the city or going to the Table Mountains. I saw the potentials of providing mountain bike tour to tourists as a new way to raise awareness among the cycling tourists about the importance of preserving rainforest that is now shrinking in size very rapidly. 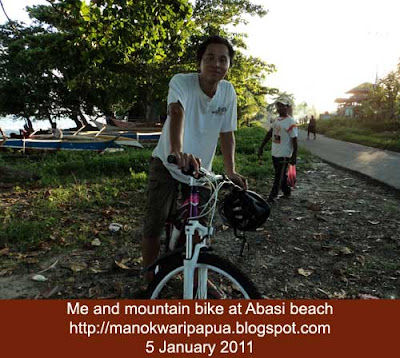 The first tour went well but the second one was completed with a small incident. When we were entering Anggori village in Amban area behind the Table Mountain, on a small slope, the chain of Danang's bike went off the rail when he was trying to shift it to gear 2 (which did not exist) and stucked between the bike frame and the front gear. I had to borrow a screw driver and a plier to hammer it out leaving deep scar on my new bike. Well it was an unfortunate experience but it taught me a lot about how to adjust the screws that control the derailleur mechanism.
One thing that I was really impressed from this mountain bike tour was that along the road to Pasir Putih beach and to Cape Bakaro, a little bit outside Manokwari city, we were warmly greeted by children, and teenagers. They might see our new mountain bikes complete with their  Shimano Alivio gears as their dreamed bicycles because such human powered vehicles were quite expensive for them. They might need to save their pocket money for years before being able to buy one. But the mountain bike tour has given a great impact to children a long the usual route that I pass through that now I see more bicycles on the road from Missi - Kwawi - Pasir Putih - Arowi - Abasi and Cape Bakaro. 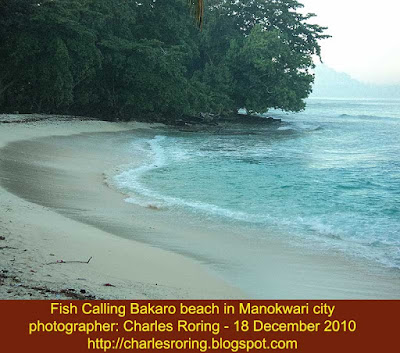 I'm interesting in doing a bike ride with you... What is your email? My email is: eb.boatman@gmail.com Please email me... Terima Kasih. Eli