It was Sunday morning 23rd January 2011, 5.30 a.m. when I was pushing my mountain bike out of my house. It was still dark outside. This time I planned to do a mountain bike tour to Cape Bakaro located on the east of Manokwari city. Much of the cape area is still covered with tropical rainforest. On the previous days, I always rode my bicycle in the afternoons from 5 p.m. to 7 p.m. During those hours, there were cars and motorcycles on the streets and roads of the city. So, I decided to change my cycling exercise time to mornings. 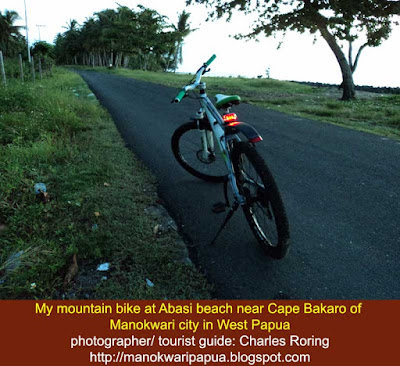 After wearing my bike helmet, I got on my bike and began pedaling it to Brawijaya street. All the city dwellers were still sleeping. One or two ojeks (motorcycle taxi) passed by me. I could feel the cool air when I increased my speed. Going down the slope behind governor's office of West Papua province, I felt that my mountain bike was going faster and faster through the dark under the big trees which had been planted by the Dutch. Because I did not attach the front lamp on the handle bar, I was afraid that I might hit other motorcycles or cars at the cross roads thirty meters ahead of me. So, I "squeezed" the Tektro front and rear brake handles to reduce the speed of my mountain bike. Everything around me was still dark. I could see some motorcycles were approaching the cross road with a small round about in the middle. I was now at Kampung Ambon area behind the city's general hospital. 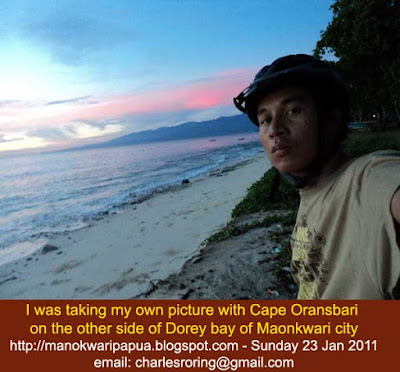 I was not far from Ketapang boat terminal in Kwawi area where I could see Arfak mountains on the other side of the Dorey bay. Some people were sitting by the beach. Perhaps they had been there since night time spending Saturday night under the full moon light. Manokwari is one of the most beautiful cities in the world. Mansinam and Lemon islands in the middle of the bay are famous destinations for tourists who like swimming and snorkeling over the coral reefs which are the tropical rainforest of the sea. Personally, I am really concerned with a lot of plastic wastes from the Manokwari city that are now polluting the coastal area of the Dorey bay. I really hope that the local government will take serious actions to tackle this problem. 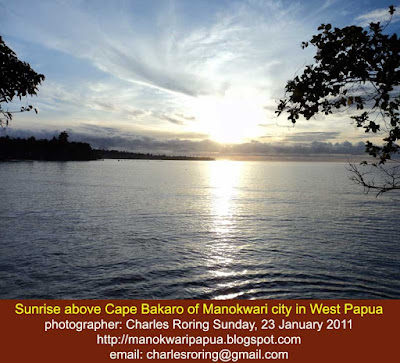 When I arrived at Pasir Putih beach, the Sun was emerging on the east just a little bit above the horizon of the sea surface at the tip of Cape Bakaro. Although the scenery of the sunrise was beautiful, I did not stop to take some photographs. I was still half way to Cape Bakaro my usual cycling destination. I would take the sunrise picture when I returned. I needed around twenty more minutes to reach the cape. The scenery of the Abasi beach was really beautiful. It was calm and peaceful to be at the beach that morning. I did not see many people there. I turned right and headed to the beach just ten meters from the waves. I pulled my digital camera out of my pocket. It was a Sony SteadyShot DSC-W310. I turned it on and began shooting. 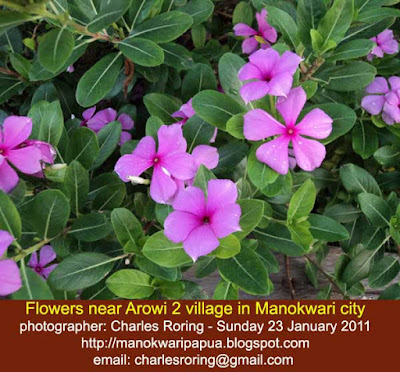 Then I got off my mountain bike and pushed it back to the road again and took some pictures of the surrounding scenery. I was quite happy because I could take as many pictures as I like. After spending five minutes taking pictures of the beach, some flowers, and the road of Abasi, I continued cycling to Cape Bakaro again. The morning was now bright but with the half full moon was still white in the middle of the blue sky above my head. Birds were singing on the coconut trees. I thought that because it was Sunday, I should not go further to Bakaro village where the fish calling station was. So, I turned around and returned to Manokwari city again. 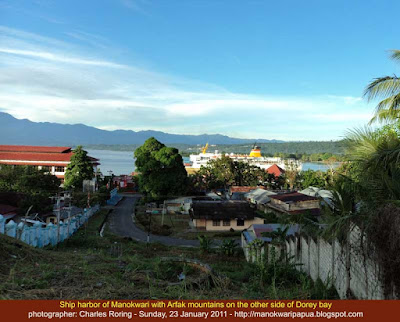 Before completing my morning mountain bike tour, I went to the ship harbor of Manokwari to take some pictures of a PELNI ship. It was MV Labobar capable of carrying around 2,500 to 3,000 passengers. My friend Grietje in the Netherlands needs the pictures to complete the revision works of the Travel Guide Book of Ecotourism Manokwari West Papua. The bell of the Catholic church St. Agustinus was clanging when I arrived at home again. People were now preparing to go to church. by Charles Roring
Also read: