The following photographs are about football match at Borasi field of Manokwari Papua. I shot them using the digital camera feature of my Nokia cell phone which then have been optimized in Adobe Photoshop CS 3 for web usage. Because I was walking at the time of shooting, the photo quality was not so good. I should bring my Sony digital still photo camera DCS-W30 but I forgot. 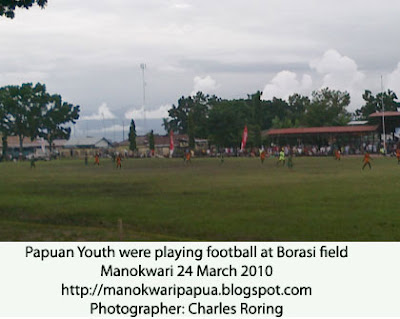 There is an office near the Borasi Football Field that sells airplane tickets of Merpati and Garuda airlines. You can buy tickets here for domestic flight to other towns in Papua or to other cities in Indonesia that have direct Merpati flight from Manokwari. 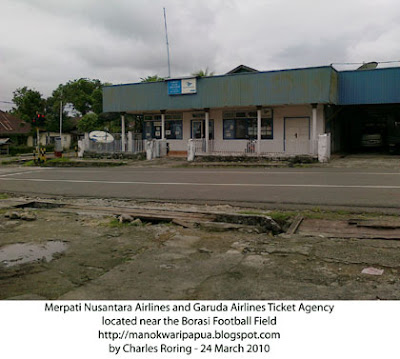 Papuan are very fond of sports. They play footballl. Every year, a number of competitions is held at the soccer field in the Kota area. Here we call it lapangan Borasi. In the photos you can see high school students were playing football in a special competition conducted by Youth and Sport Agency. During this competition, riders stopped their motorcycles along the side walk to watch the match. Whereas drivers of cars could only watched it for a while when the traffic light was red. Participants of this football competition come from various towns within the West Papua province. 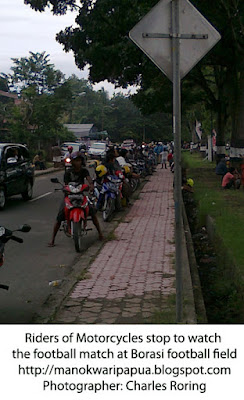 Personally, I like jogging or just enjoy walking in the morning along the Panorama weg which is now known as Jalan Brawijaya. So far, this is the best track for jogging and walking especially early in the morning because there are not many vehicles passing by. 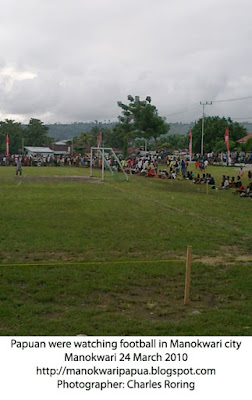 Well, if you travel to Manokwari as tourist, you can jog or walk safely at 5 a.m. to 6.30 a.m. After that hours the streets and roads of this city will be busy again as usual. by Charles Roring
at March 25, 2010