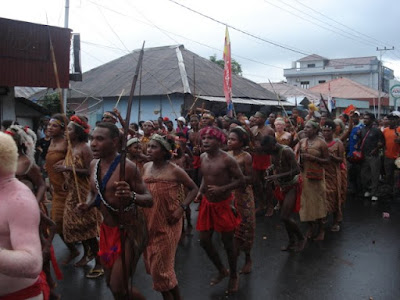 Situated at the western tip of the Geelvink bay, Manokwari city is nowconsidered to be an important hub for artists. Every year between 4 and 6 February, tens of thousands of people gather in Manokwari to participate in a street parade which they usually call Cultural Carnival. It is conducted by the GKI (the Evangelical Christian Church of Papua), in cooperation with the local government, to celebrate the Gospel Preaching Day. Groups of Christian pilgrims and tourists come to take part and see various religious, cultural and art, as well as sports events.
During this time, the main streets of Manokwari city are closed for motorized vehicles to make ways for the carnival participants to express their artistic street performance. If you come to Manokwari in early February you will be able to see this street performances where Papuan show the wealth of their art and cultural diversity in the form of traditional costumes and musical instruments; dancing and singing.
German Evangelists Otto (and his wife), and Geisler landed on Mansinam, a small island that is located in the Dorey bay near Manokwari on 5 February 1855. It was the date when the “civilization” of Papua was claimed to have begun. Although the indigenous Papuan people had developed their own civilization long before 1855, the arrival of these European missionaries and the introduction of “The Word” in a school that they opened in Mansinam was  beginning of the spread of Christianity in Papua and the entering of the indigenous people into the modernity.

Some Tips Before Coming to Manokwari for Watching Cultural Carnival 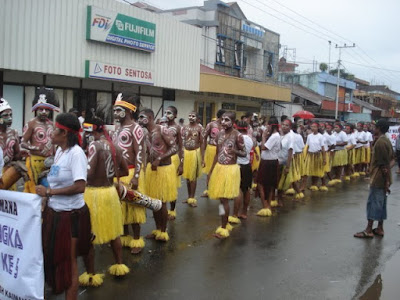 The events around 5 February are more concentrated in Kwawi area and Mansinam island. Put your digital photo or video camera in watertight plastic bag to ensure that it is safe from corrosive sea water when you go on a trip to the island by water taxi. by Charles Roring
at March 22, 2010