Street parade has been an annual agenda for GKI di tanah Papua (Evangelical Christian Church in Papua Land). It is usually held on 3 and 4 February before the celebration of Gospel Landing Day on 5 February. Today is the 4 fourth of February and I just returned from Jalan Merdeka to watch the street parade or in the local term here we called Karnaval Budaya (meaning Cultural Carnival). 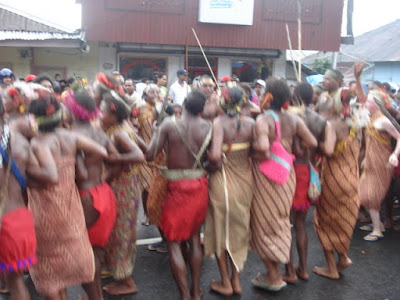 During the parade, the participants sang songs gospel and traditional songs, performed dances, and wore traditional costumes. Tens of thousands of Christians come from various towns and villages in Papua and other provinces in Indonesia to Manokwari town the participate in this parade creating several kilometers of traffic congestions along the main streets. 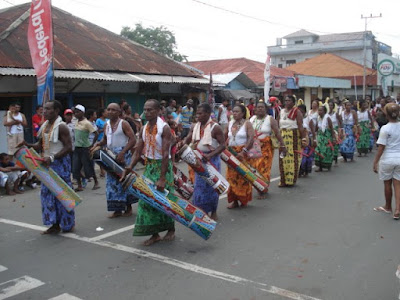 Set in the Dorey bay under the Arfak mountain facing the Manokwari town, Mansinam island became the first place where two German missionaries settled to preach Christianity to Papuan people. Otto and Geisler landed on Mansinam island to preach Christianity to, what Alfred Russel Wallace in his book entitle the Malay archipelago called, "the savage people."  Now majority of the Papuan population are Christians. 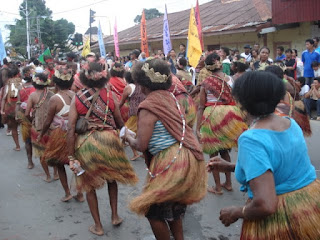 Besides being famous for religious tourism, its beautiful scenery and underwater shipwrecks continue to attract foreign tourists from around the world. Just tens of meters away off the Cross monument of the island, lies the Pillbox shipwreck which has usually become the starting point for divers. Another bigger shipwreck, the Shinwa Maru - a Japanese ship and coral reef can be explored at the south east off the island.
Private Guided Tour
Manokwari is your gate to Arfak mountains - a very beautiful hiking trip destination. Travelers who want to go to Numfor island also need to go to Manokwari first before continuing their trip by airplane or by ferry boat to Numfor. As a tour guide, I provide a private guided tour services for you if you want to go hiking in the mountains or enjoy snorkeling over the coral reef of Mansinam and Numfor island. I can also escort you to see the Mount Botak in Momi Waren of in the southern region of Manokwari regency. If you are interested, please, contact me via email: peace4wp@gmail.com, I will be happy to arrange your trip and escort you around Manokwari or Numfor island.
at February 04, 2010