Trekking and Watching Tree Kangaroo in Arfak Mountains of Manokwari

I used to guide a visitor named Tia on a trekking tour to Imubri area of Arfak mountains of Manokwari. We went trekking in the jungle for a few days. Our goal was to see tree kangaroo but we were also interested in seeing tropical trees, shrubs, vines, wild flowers as well as birds, insects, mammals and marsupial animals.
We started our tour early in the morning. Accompanied by local people, we began walking into dense forest of Arfak mountains. At first, the path was only flat. After 30 minutes of walking, the path was leading us to steep slopes. Our walking speed was getting slower as the slopes were getting steeper. 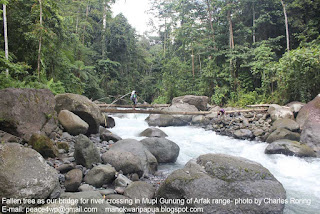 After walking for one hour we reached a flat ground again. It was almost eight o'clock in the morning but the surrounding area looked darker. Only very little sunlight that could penetrate through the canopy of the forest. Suddenly, I heard sounds of big birds flapping their wings in the branches of the tree in front of us. Several Blyth's hornbills, perhaps after hearing noise from our voices, jumped from the tree and began flying away. They looked awesome while flying. I had not finished admiring the beautiful birds when I saw another attraction on the ground. There were some pink wild flowers that were coming out of green plants. I could not identify its species name. There were also butterflies that were flying in the air. We might have disturbed them from daily routines of collecting nectar from the flowers.

Leg pains and Massage
We walked up and down numerous steep slopes and crossed small and big rivers. In the middle of the day, we stopped at the side of a fast flowing river to have lunch.  It was the last river that we would cross. After lunch, we climbed very steep slopes again until we reached our base-camp located very deep in tropical rainforest of Imubri. It took around 7 hours of walking up and down steep slopes, for us to reach our destination. Tia complained of pains in her whole legs and body. She had repeatedly complained about the pains before we climbed the second mountain that day. She admitted that she never did regular exercise.
That night after dinner, I gave her a gentle full massage to ease the pains and relieve tensions in the muscles of her body and legs. I used sandalwood oil that I applied on my palms and then warmed them above ember of wood fire. My warm palms would transfer moderate heat to her muscles. This could improve blood circulation in her legs. She felt better after the massage and could sleep well that night. I still gave her massage treatments after some jungle walks in the mountains to make sure that she could walk back to the main road again.

Tree Kangaroo
We still had some walking tours in the jungle to watch birds of paradise, butterflies and most importantly the tree kangaroos. The indigenous people were very smart in locating where the kangaroos were. They used dogs. Dogs that were trained to hunt animals in the jungle could sense the smell of tree kangaroos even though  the animals were sitting in the branches of high trees. When the dog found a tree kangaroo, we could see scratches of claw prints on the trunk of the tree.
Taking pictures of the kangaroo was quite difficult. I had to adjust my camera several times and aimed it at the marsupial animal located high above my head. After several attempts, I could make some nice photographs of the tree kangaroo (Dendrolagus ursinus). It was eating young leaves. He saw us on the ground but did not move away from us. Perhaps he was curious about what we were doing down there.
We were very happy with the trekking tour in Imubri area of Arfak mountains because we could see tree kangaroo in their natural habitat. We did not see flame bowerbird but it was ok. Overall the trip to watch wild animals was tough or quite difficult as we had predicted it before. But we were satisfied with the experience. It was an adventure.
Birds of Paradise
The jungle of Arfak range is the natural habitat of various animals including several species of birds of paradise. Visitors need to bring binoculars if they want to watch the birds.

Where is Arfak range?
It is a mountaineous region in Manokwari, the capital of Papua Barat province of Indonesia. See the map below:

How to go there? 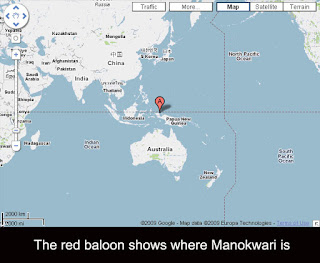 Are you interested?
Since 1800s Arfak has been a famous destination among foreign visitors. In the past, they came as researchers who wanted to study anything about New Guinea, its people, its flora and fauna and its land. Now most of the visitors are tourists. Only very few tourists would like to do long hours of walk to the jungle where tree kangaroes live.
Well, if you are interested, please, contact me (Charles Roring) by email to: peace4wp@gmail.com. Don't forget to do regular exercise before taking the rainforest tour with me.
at July 10, 2016