For the last two days I guided Sachi and Riaz on a jungle walk and snorkeling tour in Manokwari. For the rainforest tour I chose Table Mountain which was close to the city. It was done in the first day. We started the jungle walk quite late in the day at 17.00. We visited The Japanese World War II Memorial Monument which was constructed in 1956 inside the forest. 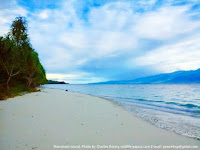 Riaz had very good knowledge about history of the Pacific war and shared it to me. We were at the monument for around 15 minutes and then continued our walk again. We saw various kinds of trees and creeping plants. We heard the sounds of some birds but only the helmetted friarbird (Philemon buceroides) that I could identify. We arrived at the other end of the forest which was the campus of State University of Papua at around 18.45. I stopped an ojek for Sachi and then a public transport minibus for me and Riaz to go back to Swissbel hotel.
The next morning, we continued our tour to the beach. I planned to guide them on a snorkeling tour inside the bay but the weather was so bad. The wind was blowing from the South East. So, I decided to change the destination of our snorkeling trip to the north coast of Manokwari. When we arrived at the snorkeling site we still saw some waves. I went into the water first to check for the waves and the current. I could tell that it was safe for them. Minutes later, I returned to the beach and invited them to follow me to the sea. We swam to the drop off where we were able to see parrotfish, butterflyfish, moorish idol, surgeonfish and various kinds of corals. We did not spend much time in the water. After around twenty five minutes, we returned to the beach. There were only a few children from the nearby village swimming in the area.
We returned to the city again by ojeks (motorcycle taxis) for having some lunch. Because the place where we had lunch was near the Ketapang boat station, after lunch, we went there on foot. We went to Mansinam island to enjoy snorkeling for around one hour. It was a nice experience for them. We saw more reef fish from damselfish, to butterflyfish, pink anemonefish, grouper, anthias, parrotfish, wrasse, goatfish, and a big crocodile needlefish (Tylosurus crocodilus). I thought it was a baracuda but after close inspection it was not. I also saw sea snake and black urchin, sea cucumber. There was also a crown of thorn which was bad for coral reef.
We planned to enjoy snorkeling again in further place on the third day but the weather was so bad. It was pouring until after mid-day. So, we did not go anywhere. Sachi enjoyed full massage as the alternative.
At night we had delicious dinner at a restaurant near soccer-field. I took the opportunity to ask the waitress to make some nice pictures of us as souvenirs. The next morning, they left Manokwari by plane.
Please, contact me (Charles Roring) by email to: peace4wp@gmail.com if you are interested in taking a rainforest trekking and snorkeling tour in Manokwari.
at July 09, 2016