Hiking along the tropical rainforest of Dopi river

Dopi is the tributary of Pami - a river in the north coast of Manokwari. It is a nice destination for nature lovers who want to go hiking in the tropical rainforest of West Papua. Last week, I guided a British biologist, Georgie, on a 3-day hiking tour in the jungle of Dopi river. This British biologist was interested in tropical flowers such as rhododendron, dendrobium and terrestrial orchids. Some flower trees such as the African tulip (spathodea campanulata) grew at the bank of the river. They can easily be recognized by their cup shaped flowers whose petal colors are orange and yellow. The following is the photograph of a terrestrial orchid that we saw in the jungle. I guess it is from Genus Spathoglottis. It looks very similar to spathoglottis plicata but honestly I dare not identify its species name. 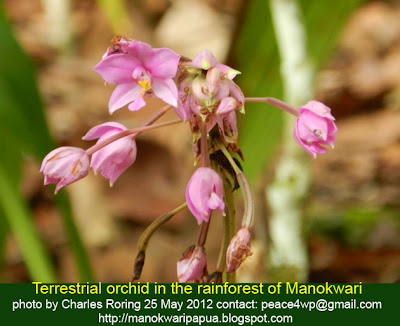 During our hiking tour, we were able to see various species of birds including the lesser birds of paradise (paradisaea minor), blyth's hornbill (rhyticeros plicatus) and pygmy parrots. I also took some pictures of pinon imperial pigeon that was perching on the branch of a tree around 20 meters above my head. The bird has got delicate gray feather. With my Nikon Coolpix P500, I shot the birds several times. I had to use 2 second self timer feature of the camera to create sharper photograph. In my first trip to this forest last year with Herman van der Hart and Elizabeth Pot, I was lucky because I saw a Western Crown Pigeon. 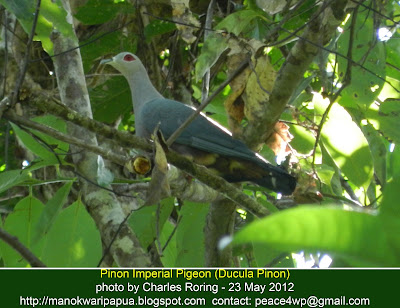 While walking through the Dopi river, I caught a green frog and handed it over to Georgie. She gently held this amphibian animal but later it jumped out of her hands and into the water again. I hardly ever saw a frog swimming in the river. Perhaps, it jumped into the river trying to escape from its predator (a snake). The coral rocks that we saw at the bottom of the river indicated that the land had been elevated from the sea perhaps since several centuries ago. Alfred Russel Wallace in his book The Malay Archipelago also explained about the elevated reefs not only in New Guinea but also in other islands such as Moluccas, Java and Timor. 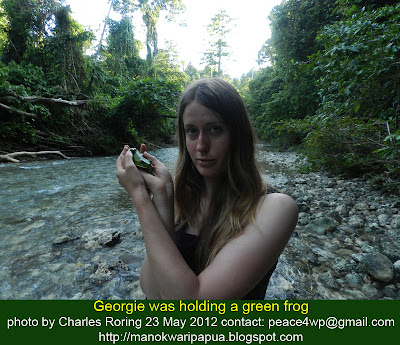 We stayed in a camp that had been built for tourists.  At night we ate stir fried vegetables and sweet potatoes. When we were busy preparing our dinner, Georgie took the opportunity by learning how to make sambal (chilli sauce). 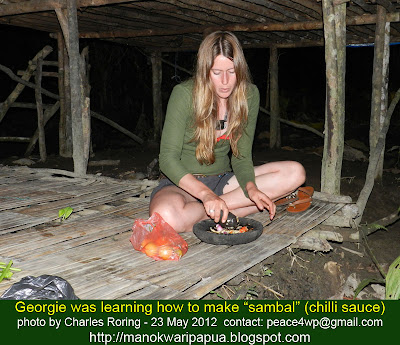 This rainforest tour is offered to anybody who wants to explore the tropical rainforest of West Papua in affordable price. Besides hiking, birdwatching and camping, tourists will be able to appreciate the high biodiversity of the rainforest and support its preservation. The rainforest tour itself will provide employment opportunities to local people who are the main stakeholder of this precious environment. If you are interested in taking a rainforest tour in Manokwari, please, contact me via e-mail: peace4wp@gmail.com. by Charles Roring
Also read: Hiking tour in Inggramui forest
at May 31, 2012