I accompanied Georgie - a British tourist on a little tour around Missi and Anggrem areas of Manokwari to visit some Papuan artists. She bought bracelets, earrings, necklaces and wooden statues as gifts for her friends and relatives. 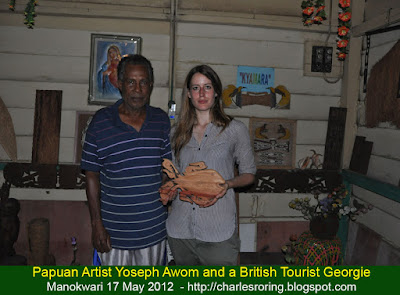 When we were in Anggrem, Georgie saw some Papuans who were sitting near a table where betel nut and betel pepper were being sold to pedestrians. She told me that she would like to try chewing them. We stopped at the table and asked the vendor how much a package of pinang was. Pinang is the local name for betel nut + betel pepper + lime powder. The man who stood near the pinang table said that one package was Rp. 3,000.
She paid 5,000 and got 2,000 as the change. The man took some pinang and began chewing it to demonstrate how it should be chewed. First, he peeled off the husk of the betel nut with his front teeth. There was still some husk fiber covering the seed when he began chewing it. After a few seconds, he took the betel pepper and started to chew it. Then he dipped the pepper on the lime powder and put it into his mouth. 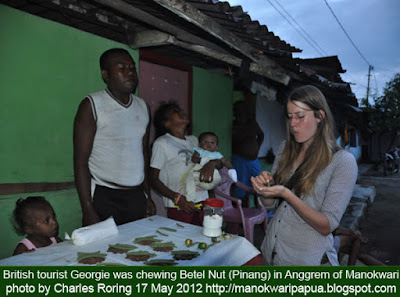 Georgie followed him. It was a little bit difficult for her to peel the green husk of the pinang from its seed. Women who were watching her said that if she chews pinang regularly her teeth will become stronger and her mouth will be fragrant. It won't be smelly when she wakes up in the morning.
After around 2 or 3 minutes, she could make it and began chewing the unripe pinang.  She took the betel pepper and acted as what the Papuan man had done. Five minutes later, I could see that Georgie's face turned red. Sweats coming out of her face and neck. The juices of these herbs reacted fast. She spat on the ground and there the juice had turned red. I thought she was drunk or was feeling dizzy. I asked a glass of water from women who were sitting near us. One of them entered the kitchen and came out with the water. Georgie gargled to rinse her mouth and spat it to the ground. She drank the water. She felt better after that. A girl handed a baby to Georgie. 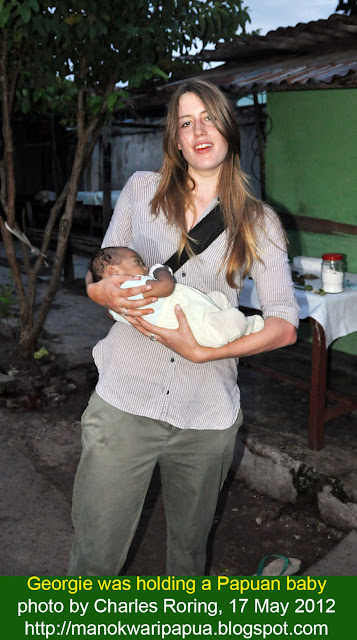 While he was in her hands, I took the opportunity to make picture of them. It was a nice experience for her chewing the betel nut for the first time although she was not familiar with its taste.  by Charles Roring
at May 18, 2012