My Visit to Pantura of Manokwari West Papua

The natural scenery of the northern coast region of Manokwari is very beautiful. I went there two days ago on a survey to identify potential places along the Pantura areas (that's the name of the northern coast in bahasa Indonesia) which can be developed for eco-tourism project. Pantura stands for Pantai Utara or meaning literally Beach North.
Nuni village - the place where you can eat lobster
Some of the beaches have black sand and white sand. For me, the area near Pulau Kaki or Kaki island is potential for marine sport activities. In addition, tourists can enjoy eating lobster in Nuni village, a small village right across from Kaki island. When I was in Nuni, I had a chance of recording some videos of a boy going to the sea to catch lobsters. Actually the lobsters had been caught before. 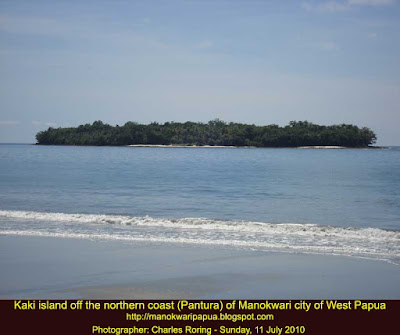 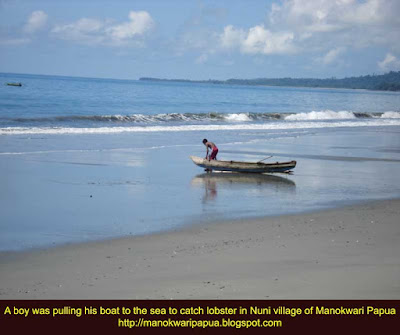 The fisherman collected them inside a large  net bag and put them under water. In a set date when a public car from Manokwari city comes to the village, the fisherman would go to the sea to take the lobsters again and return to the village. He would go to Manokwari city by the public transportation and sell the lobsters. The current price of one kilogram of lobster is 105 thousand rupiahs or 9.63 Euros.  These lobsters are usually sold alive and fresh from the sea. The villagers looked happy when we talked with them.
Watching Eagle in Asai
After taking pictures of the beautiful Nuni village and its Kaki island, I continued my trip to Asai. Here the beach stretches along a small bay. Some Dutch families built their houses in Asai overlooking the Pacific Ocean. They have been living here since early 2000. There is a tall tree near the beach of Asai where eagles use it to build their nest. When visiting one of the Dutch families, I was able to see the eagle's nest clearly. I managed to spot a nest using binoculars and took some pictures of it using my digital camera. Here in Asai, I had a chance of swimming in cool fresh water of a small river not far from a house that belonged to a Dutch family. 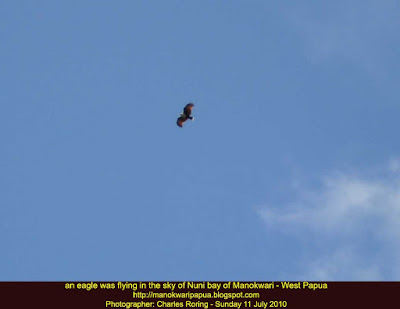 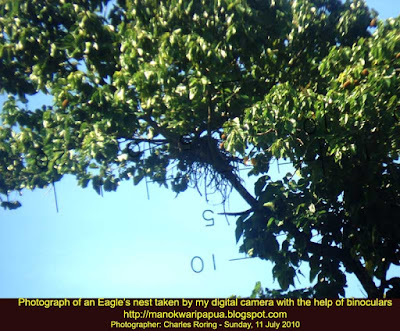 During my visit to the Dutch families, I was able to take some pictures of beautiful flowers. They grow orchid, hibiscus (Indonesian name is kembang sepatu), and various other species of tropical  flowers. 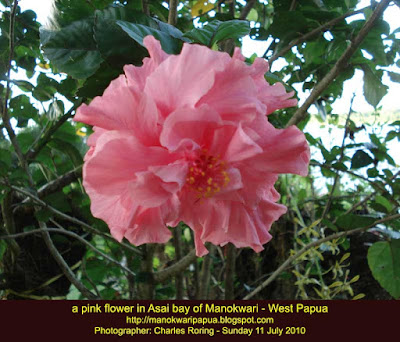 I still have a lot of pictures, videos and stories about the Northern coast of Manokwari city of Papua. I will share them later in my other posts. If you are interested in visiting Manokwari city of West Papua and need more information, you can contact me - Charles Roring - by email to peace4wp@gmail.com
Also read my other travel journal: Arfak Mountains
at July 12, 2010