I went to Rendani airport this afternoon. I went there on a purpose of buying some tickets for the Labrees who want to go to Wasior, a beautiful small town which is now the capital of Cendrawasih Bay Regency. Mr. Labree, the head of the family, was born in Wasior. I went to the airport with my friend, Paul Gasper, who will fly and accompany them to the town for a 2-day tour in Wasior and its surrounding. The Labress will fly by Susi air, a national commercial and chartered airlines in Indonesia. Susi is the name of a famous woman entrepreneur in Indonesia. For Manokwari city - Wasior flights, Susi Air provides an aircraft that is powered by single turbo prop engine. Its capacity is twelve seats capable of performing short take off and landing on unprepared runway. 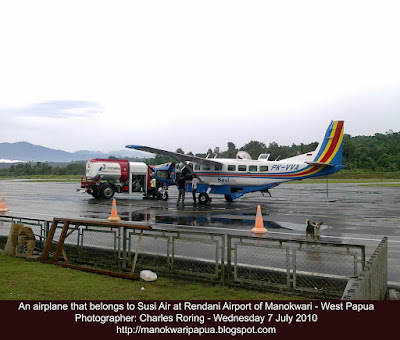 It looks similar to Pilatus Porter a small but robust aircraft operated by AMA - Associated Mission Aviation, an airline in West Papua that is operated by Catholic missionaries. Tens of years ago it was a non-profit airline but now it is a profit oriented company. When we arrived at the airport where the office of Susi Air was, the door and windows of the ticket counter were closed. The staffs of the airline were taking lunch break. While we were waiting for them to open their office again, a young man came and asked what our purpose was for waiting in front of their office. I said that we wanted to buy some tickets. He asked us to wait for a while. Well, I and Paul took a chance of walking to the airplanes parking lot and shot some photographs of the airplanes parking on the airport. I took a picture of an airplane that belongs to the Susi Air and then after that walking back to the office again. Now it was open. I gave a piece of paper containing the names of the family members of the Labree.
The staff of Susi Air thought that we only wanted to buy tickets for Manokwari Wasior but we said that we had informed the Susi Air in June that we wanted to buy round trip tickets (Manokwari-Wasior and Wasior-Manokwari). Staff of Susi Air asked us to wait for a while for them to contact their friends in Wasior town.
While sitting outside of the Susi Air ticket counter, I told Paul that, based on my personal observation on satellite photographs of Rendani airport, there is a lake near the beach across from the airport. Paul was suprised to hear that. He never knows such a thing.
It took around fifteen minutes to get confirmation from Susi Air's representative office in Wasior that the tickets for the Labrees for flying back from Wasior to Manokwari are readily booked. When all the ticketing matters have been settled, we walked into the waiting room of the airport and headed to its restroom.
We walked back to the parking lot and after having a short conversation with his friend, Paul kicked start his motorcycle and off we went back to the city. We were some three hundred meters away from the airport when Paul reminded me about the lake. I said, "ah, sudah, katong trus saja." (Ugh, it's over, we just go on." He replied, "Oh, no, we could still return, we were not too far from the airport."

Lake Rendani
Paul turned his motorcycle and now we were riding back to find where the lake was. On the left side of the street, there were a number of houses which are the residence of the employees of the airport or air transportation agency. While searching for the footpath leading to the lake, I told him that according to the satellite image of Manokwari city, the lake was located near the end of the runway of the airport towards the sea. 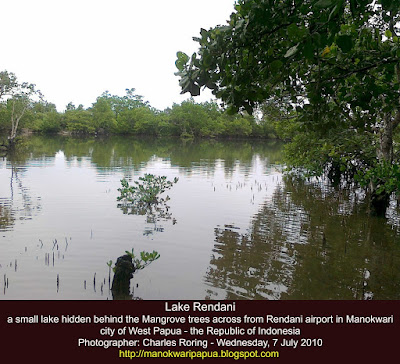 Exactly across from the parking lot of the airport, among the houses, we found a pathway leading to the beach. It was near a large banner showing the picture of the Governor of West Papua. Paul slowed down his motorcycle, a Supra Fit type manufactured by Honda, and turned left. He rode his motorcycle slowly to avoid colliding with trees and slipped on muddy footpath. We ended up on other people's house. Fortunately the footpath had another branch to the right. We followed the pathway and stopped by an unfinished house foundation. We got off the motorcycle and walked for around 25 meters towards the sea. And yes, what I had seen in the Google Earth Satellite images about Manokwari city was right. The lake was right behind the mangrove trees that grow around the lake. Some birds were singing inside the trees.
We passed by a small concrete house whose walls were not plastered. I greeted a woman inside the house and told her that we were passing by to see the lake. There were some pigpens near the lake. Pigs are raised by the Papuans for their meat that is quite expensive in Manokwari city. While walking along the bank of the lake we met three children. They were fishing. I said, "Hello" and began asking some questions to them such as: "is the lake big? Are there crocodile in it? Do people from the city like to come here for weekend recreation? Could you show us the way to the front of the lake facing the sea?"
These little Papuan children were happy to answer all our questions. They guided us to a place where stream of sea water enters the lake to provide refreshment to fish already living inside the lake. I managed to take some photographs of the lake using my camera feature of my Nokia 5630 XpressMusic. I had set the photo quality to 3M to get the highest pixel quality that the cell phone can capture. Unfortunately, I forgot to set the video feature to high quality. I did make a few video recordings but their quality was standard for playing on the cell phone's screen. I am not satisfied with the results because I intend to upload the videos captured from this Lake Rendani to Youtube. 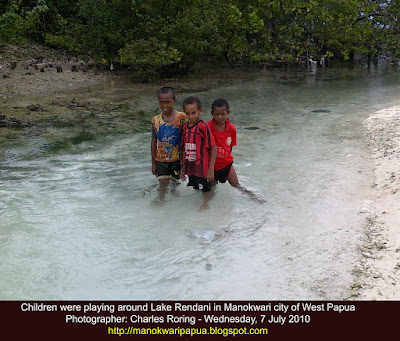 I asked them whether there are a lot of fish in the lake and whether they are big. They said yes. Big fish are in the middle of the lake. One of their friends came. He brought a string of fish which he had caught. "Hey, come here. Show me your fish in front of my camera." I asked him to come closer so that I could capture a short video of him show some fish that he caught from this lake. His name was Harpenas. From that name I knew that it stood for Hari Pendidikan Nasional or The National Education Day. So I asked him again, "were you born on 2nd May?" The boy answered, "Yes." The National Education Day is celebrated every year  in Indonesia on 2 May.
Most of the city dwellers do not know about the existence of this lake. Only a few people living around the lake or near the airport who know about it. I think it is good to leave it that way to prevent it from being polluted with plastic garbage thrown by the visitors or holiday makers should it become famous.
Before leaving the lake, I told the children to collect the plastic wastes that were scattered around the lake and burn them. I and Paul told them that we would bring "orang barat" (west people) to the lake one day when they had cleaned the lake and give them some money for that. They answered they would cleaned but asked when the tourists would come. I could only say, "Later, when the lake has been cleaned."  A fake promise? I don't think so. I might bring tourists to see this little beauty of Manokwari city hidden behind the mangrove trees of Rendani airport.
It's nice to find this lake, and it will be nice if I had a chance to bring tourist to this lake to fulfill my promise to these little children. by Charles Roring
at July 07, 2010