Two days ago (Sunday, 4 July 2010) I and my friend Paul Gasper went to Syiou. It was a village located in the slope of Arfak Mountains of Manokwari regency of West Papua - the Republic of Indonesia surrounded by dense tropical rainforest. If you don't know how these mountains look like, you could see them on the following photographs.
Tropical rainforest of Arfak Mountains was home to hundreds of species of beautiful birds. Some were the well known Vogelkop Bowerbirds, and paradise birds. Because it was Sunday, I had to wait for Paul to attend morning mass in the Catholic church of Saint Agustinus before we could start the three hours journey to Prafi and then to the Arfak mountains.
At 10:13 a.m. I received his text message, "Are you ready to go, friend?" I replied, "Yes." Half an hour later we left Manokwari for Arfak Mountains by motorcycle. Honestly I was a little doubtful with the motorcycle whether it could bring us to the mountains. It was a Supra Fit type, manufactured by Honda.
The streets of Manokwari city were not too crowded with cars and motorcycles. Shops were still closed. Flags, representing the countries that are participants of 2010 World Cup final in South Africa, were decorating every corner of the city. I could see the flags of Brazil, Spain, Germany, Argentina and the Netherlands. The Netherlands' flag is the most popular one in the city. It means majority of the town dwellers in Manokwari are supporters of the Netherlands football team.
The road leading from Manokwari to Prafi was quite smooth. Paul rode his motorcycle fast, above 60 km/hour. After passing by Lake Kabori and Maruni beach, the motorcycle had to climb the Warmare hill whose slope was around 45 to 50 degrees.  I knew that Paul's motorcycle could overcome this hill easily. After the Warmare hill, we were entering the Prafi valley. A fertile land which was given by the central government of Indonesia to migrants from Java to develop agriculture and sawit  palm and cocoa plantations. We rode along kilometers of palm oil and cocoa plantations. This palm oil was not productive anymore and is considered by the local government as a failed enterprise. It does not give any significant profit both to the local government and local Papuan people who previously owned the land.
We then turned left at a road junction that would lead us to villages that are scattered along the ridges of Arfak Mountains. Here the road was not smooth anymore. We had to face steep slopes where some of them are not paved. We were lucky that we went there when the weather was clear and the road was dry.  Rain often comes to this tropical rainforest. Some of the slopes are very dangerous for inexperienced riders or drivers. Besides they are steep, they are covered with sands that could cause cars or motorcycles to slip. Everywhere around us was green and quiet. The sounds of water streaming below us and birds singing among the trees were beautiful natural music that I really enjoyed hearing. 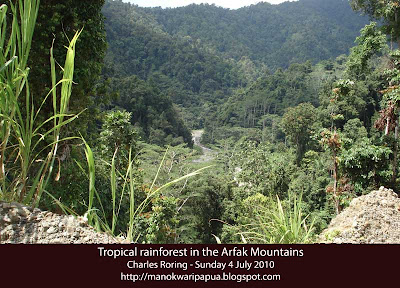 When I saw a Papuan man was walking with his daughters, I asked Paul to stop for a while. I greeted the man, "Selamat siang, Bapak" meaning good afternoon. He replied, "siang." We asked whether this was the road to Syiou village. He said, "yes." From our short conversation, I got information that they were catching butterflies. They would sell the butterflies to a Chinese vendor in the city. Before continuing our trip, Paul gave the little girl a pack of snack. I did not count the number of hills that this Japanese motorcycle had to overcome but after more than two hours riding it through the hills with their unfavorable road condition, I could conclude that Honda Supra Fit was a reliable and efficient vehicle. Of course I had to also give credit to my friend Paul Gasper who was an experienced rider. 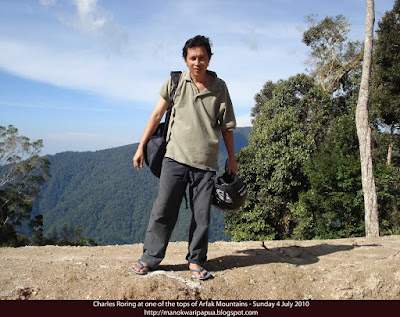 We were now at one of the summits of Arfak Mountains. The Arfak tribes build their houses along the ridges of the mountains. I was amazed by the scenery that I saw. It was cool and fresh. I stood at the edge facing rows of mountains and troughs where streams of clear mineral waters flow through. Here the color of the plants does not look the same as the color of the plants along the coastal region. At the top of the mountains, the leaves were pale green, brown and even red. Musk covers the barks of the trees and the surface of the ground. The villages look simple. Many of the villagers have lived in concrete houses, or wooden cottages that were built from planks constructed by government for them under a program called free houses from social department but some people still retain their traditional house called rumah kaki seribu (a thousand-feet house). It's good to be here seeing the environment that is still in pristine condition. 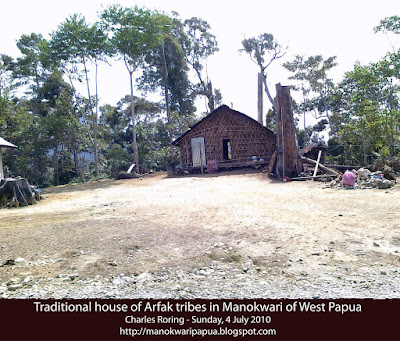 The next trip to Syiou village was not ascending but descending. It took another 10 minutes descending the unpaved and bumpy road before we arrived at Syiou. We stopped and I asked a man who was talking with some other villagers. I said, I need to meet a man named Zeth. The man showed another young man standing not far from us saying that he was Zeth's son. Then I was introduced to him. He was standing with his motorcycle. He asked us to follow him from behind. 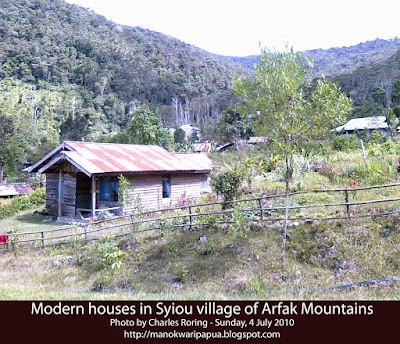 Zeth, Maria and Untu were talking in the veranda of a cottage when I, Zeth's son and Paul Gasper arrived. Maria said to them, "Mas Roring comes." I greeted them. I was happy that I could meet them. They welcomed us in the cottage or hut that is usually used by tourists when going to Arfak Mountains for bird watching. The cottage was not far from the village. It was on the pathway leading into the forest.
I like the quietness of the village, no roaring sounds of motorcycles or loud music. What I hear was the sounds of birds singing in the trees and the sounds of leaves and branches blown by the wind.
Actually I did not want to return home but I didn't bring enough equipment and food to stay there for a couple of days in the village or in the jungle.
I informed Zeth that I would bring tourist to this village at the end of this month. It was a nice conversation with them but I had to return to the city again at the same day. After saying good bye to them, I and Paul left Syiou village for Prafi before going back to Manokwari city. Prafi is a large valley located at the foot of the Arfak Mountains. Its soil is fertile suitable for agriculture. Between 1970s and 1990s, the Government of Indonesia sent thousands of migrants from outside Papua, mostly from Java island, under a controversial program called transmigrasi to Prafi valley and other parts of Papua, to settle there and develop agriculture. Here in this valley, they grow vegetable; edible tubers such as cassava and sweet potatoes; and rice. A state owned palm oil corporation called PT Perkebunan II from North Sumatera also opened thousands of hectares of sawit plantation in Prafi. It is a failed project. It does not give any profit to local government and particularly the local Papuan who previously owned the land. Pristine tropical rainforest that was high in biodiversity had gone foreever.
We arrived in Prafi at 6 p.m. and immediately eat "lunch" there. We ate fried chicken with chili sause, and raw vegetables. Because I was very hungry I finished them all in no time. I paid 42,000 rupiahs or 4.7 US dollars for two people for the delicious lunch. 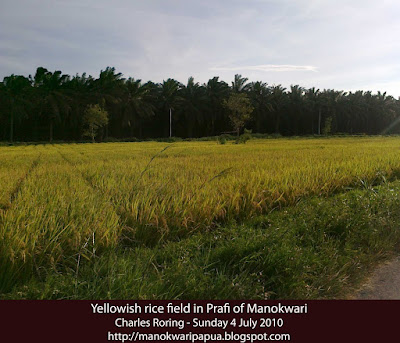 After filling our stomach, it was now the time to fill the empty tank of the motorcycle with gasoline. We rode to a gas station but it was closed. Fortunately, there was a kiosk that sells gas. Along the way to the gas station, I passed by rice fields and vegetables patches. I really like the scenery of the rice fields that looked yellow contrast to the dark green leaves of sawit trees and cocoa plants. When the tank had been filled, we rode back to Manokwari city again. We arrived in Manokwari at 8 p.m. It's a tiring but pleasant trip. Arfak Mountains and Prafi valley are beautiful places worth visiting. I will go there again in the near future,
If after reading this article, you are interested in visiting Arfak Mountains and doing bird watching or studying herbal medicine in the tropical rainforest, and Prafi valley, and you still  have some questions, you can contact me (Charles Roring) for further information about them. This is my email address peace4wp@gmail.com and my whatsapp: +6281332245180. I will be glad to answer your questions. Thanks Google Australia for indexing this post. Also read my other articles: