Several months ago (January, 2010), I accompanied three Russian tourists hiking in the Table Mountain of Manokwari. While we were walking we saw a plant whose vine hanging on a large tree. My friend, a local Papuan named Paul, called it "Tali Kuning" or "Yellow Rope." 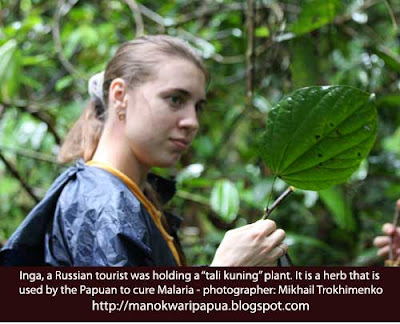 Tali Kuning is used to cure Malaria, a deadly disease which is common in West Papua and other tropical regions. When the Russians asked him how to use it, Paul explained that the Papuan usually boils the tali kuning as if they are boiling tea. The one who suffers Malaria needs to drink a glass of tali kuning tea three times a day for at least one week. Its taste is very bitter. It is considered as a very good herbal medicine for curing Malaria. by Charles Roring
at May 18, 2010