A visit to Mansinam Island and A meeting with Peter Rumbruren

Yesterday (20 May 2010), I went with Katja Zimmermann, a German tourist, to Mansinam island. It is located in the Dorey bay of Manokwari. Mansinam is an important island for Christians in West Papua. In 1855 German missionaries Ottow, his wife and Geisler landed on 5 February to preach Gospel to the indigenous people of Papua. Now most of the native population of Papua island are Christians. Katja and I did some snorkeling at the back of the island and then we went hiking along the coast to reach the Mansinam village that is located at the north of the island. After making mistakes in walking around in the forest back to the Manggewa - the starting point where we enjoyed snorkeling, we decided to walk along the beach to make sure that we would not get lost in the jungle for the second time. 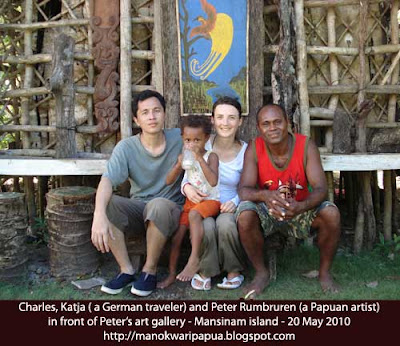 Butterflies, birds, and wild flowers of the Mansinam island were very beautiful. Mansinam also has beautiful coral reef park at the southwestern region of the island and several shipwrecks that are potential to be the diving sites. It was nearly 3 p.m. when we arrived at the village. I asked a little boy named Leo to show me where the residence of Peter Rumbruren was. He is a Papuan artist whose carvings have become favorite souvenirs among tourists. Finally, we arrived in front of his house. I decided to take my wallet to give some money to the boy.
But Katja insisted that I must not give money to the boy. It would be considered as encouraging capitalism and damaging the spirit of eco-tourism. She said that Balinese children like to ask money from tourists. Instead of being creative children, they become beggars. I like Katja's idea. Based on her advice, we went to a kiosk around one hundred meters from Peter Rumbruren's house to buy some drinks. I gave Leo a bottle of orange juice. This boy supports the Netherlands for the World Cup football that is going to be held in South Africa. 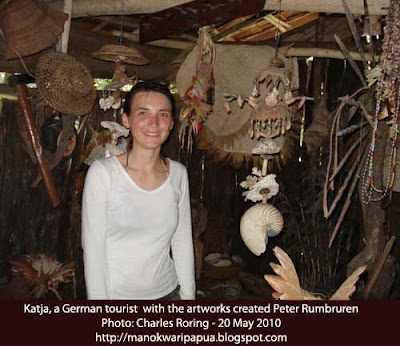 We met Peter's daughter and asked if his father was around. She went to the back of the house calling his father. Peter was very happy to meet us. We had a one-hour conversation with topics about art, culture,  reactions from the church concerning his activities in making Korwar carvings. He also showed us his carvings and the interior of his traditional house that was full of various artworks. We took some photographs and drank fresh coconut juice. 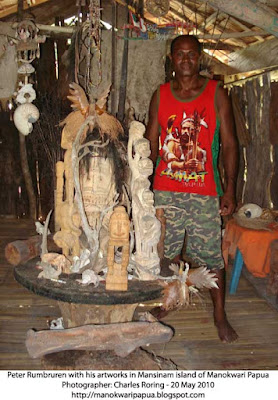 Peter is a prolific artist, his traditional Dorey hut is his art gallery. When I and Katja wrote our names on his guestbook, we could see that many tourists had visited this hut.
If you are interested in meeting him personally, you could find his house that is located at the back of the Lahai Roi church. It is not difficult to find it. You may ask the villagers and they will help you.
It was nice talking with Peter Rumbruren. It was around 4 p.m. when we left Mansinam island by Peter's boat. I hope this short story will give you an idea of how beautiful this tropical island for people who like Papua's nature. by Charles Roring
Also read: Watching Butterfly in the Table Mountain of Manokwari of West Papua
at May 20, 2010