Watching Birds of Paradise in the jungle of Arfak mountains

Walking up the steep slopes of Arfak mountains was a tough experience for Simon and Sofie. That morning I picked them up at Swiss-Belhotel of Manokwari. We left the hotel at 4 a.m. It took around 1 hour by car to reach Warmarway village and another fifteen minutes to reach Warkapi beach - the starting point where we would walk up steep slopes through the tropical jungle of New Guinea to watch the lesser birds of paradise. This is perhaps the most famous species in the avian world. 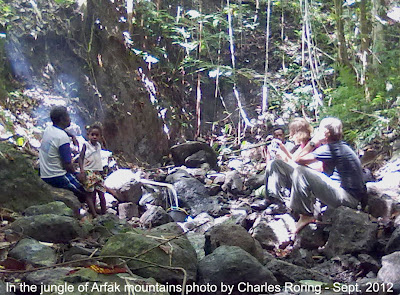 Rain and slippery paths did not discourage us. We stopped several times under the canopies of the tropical trees and bamboos. Behind us was the sounds of waves from Cendrawasih bay. The waves were landing on Warkapi beach around 400 meters below us. It was 6 a.m. we still had to climb more slopes for around one hour to reach the dancing site of the birds of paradise. If the weather is good, male birds of paradise usually fly to some trees at a cliff of Warkapi to perform courtship dance and show off their beautiful feather to attract female birds of paradise. 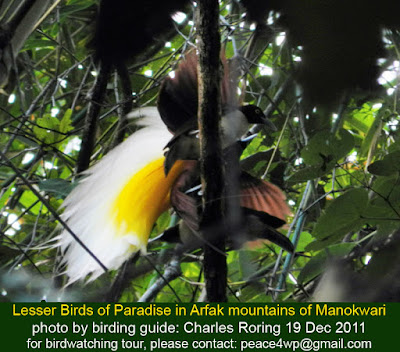 We arrived at the trees at around 7.15 a.m. They had been dancing for one hour. I could see some female birds flying over our heads to chase the female birds. Some jumped from one branch to another. It was perhaps the first and the only experience which Simon and Sofie had to watch the birds of paradise in their habitat. I did not shoot the birds of paradise that morning because my telephoto camera had been broken since my last visit to Iris strait. But I still have got some pictures of these birds that I took in the same spot when I guided two Spanish tourists last year. The above picture is one of them. Birds of paradise and other tropical birds in the jungle of New Guinea play very important role in supporting the ecosystem of tropical rainforest. They disperse seeds from the fruits which they ate. Some species of smaller birds help the pollination of flowers.
Every birdwatcher needs optical devices such as telephoto camera to see birds or animals in high trees. 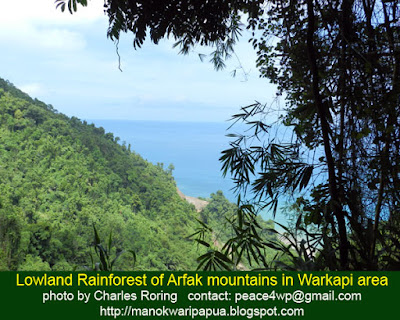 Longer Stay
In addition to watching paradise birds, visitors can also see other birds such as Blyth's hornbills, Sulphur Crested Cockatoo, Black Capped Lory, and other birds that make Arfak mountains as their natural habitat. At night, visitors may see cuscus possum and Papuan frogmouth (a kind of owl) if they do jungle walk guided by local villagers.
This is a unique hiking and birdwatching package that I offer to tourists who want to see tropical rainforest with big trees, bamboos, palms and any plants that grow in Arfak mountains. Please, contact me by e-mail to peace4wp@gmail.com for reservation. by Charles Roring
Also read: Birdwatching in Aiwatar Hill of District Senopi